In the flourishing market, prominent exchange, Binance and blockchain related operating system, Tron have pledged a huge amount to charity. Justin Sun, the founder and CEO of Tron Foundation recently tweeted that Binance and Tron will be donating $100,000 in cryptocurrency to the charity. Sun tweeted: 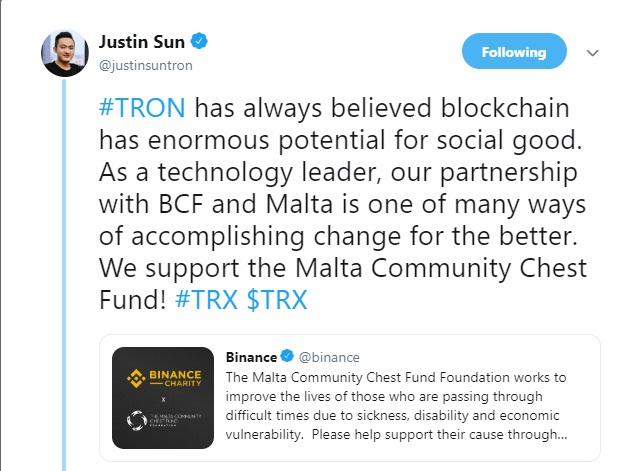 One of the concerns irking the world right now is the means to maintain transparency especially in sectors like healthcare, banking, and governance. Blockchain technology could play a vital role in these and also when it comes to charity. Sun tweeted in another tweet citing Binance CEO, CZ’s post about helping the needy people through charity, and noting that blockchain technology could help the concerns of transparency.

Blockchain technology has been slowly catching up and has become the talking point when it comes to concerns of transparency, accuracy and other dilemmas crossing people’s mind when it comes to investing. Sun tweeted in the line of making a social change and announced that Tron has partnered with Binance Charity Fund [BCF] and Malta. The founder of Tron tweeted:

“#TRON has always believed blockchain has enormous potential for social good. As a technology leader, our partnership with BCF and Malta is one of many ways of accomplishing change for the better. We support the Malta Community Chest Fund! #TRX $TRX”

BCF was introduced by Binance on December 19 of this year to provide assistance to all the charity channels to accept donations from interested people. Tron and Binance together are aiming to help Maltese national charity, Malta Community Chest Fund [MCCF] in order to improve their living situations and resort major ailing problems.

Justin Sun also recounted Maltese President’s views, in a tweet, where he agreed with the launch of BCF donation for charity. Sun tweeted:

“President of Malta, @presidentMT said that the BCF donation platform is a perfect opportunity for blockchain and crypto companies globally to reflect and express their sound corporate social responsibility values.”

The post Tron and Binance to donate $100,000 in cryptocurrency to Maltese charity appeared first on AMBCrypto.