From agriculture to aerospace, life sciences to logistics, energy to entertainment, the U.S. economy is a hydra-headed superpower with the wherewithal to withstand various headwinds (trade tensions, stronger dollar, rising interest rates, etc.) like no other economy, according to a new report from Bank of America, U.S. Trust.

This doesn’t mean the U.S. economy is recession-proof—far from it. It does mean, however, that investors shouldn’t equate weakness in one or two sectors—even housing and autos— with the end of the economic expansion, says Joe Quinlan, head of CIO Market Strategy.  The markets have not come around to recognizing America’s underlying strengths amid a whirl of challenges.

The American Economy – A Hydra-Headed Superpower

With credit-sensitive sectors like automobiles and housing exhibiting signs of weakness, investors’ fears of an impending U.S. recession or earnings swoon are mounting. Compounding matters: simmering U.S.-Sino trade tensions, which have combined with concerns over the future path of interest rates to make for very choppy and volatile capital markets as investors try to discern the economic road ahead.

We have spent plenty of time of late discussing with clients where the U.S. economy is in the cycle. Mid-cycle or late-cycle—no one really knows, but our bias is toward the former. We are more certain of the following: At roughly $21 trillion, the largest economy ever assembled, the U.S. economy doesn’t beat to a single tune. No one sector dictates the pace of growth, drives employment or determines earnings growth.1

Yes, many sectors/industries are interconnected, with multiplier or knock-on effects. But more broadly speaking, the sophistication and diversification of the U.S. economy is unparalleled. No economy in the world has the range and breadth of capabilities as the United States. From agriculture to aerospace, life sciences to logistics, energy to entertainment, think of the U.S. economy as a hydra-headed superpower with the wherewithal to withstand various headwinds (trade tensions, stronger dollar, rising interest rates, etc.) like no other economy.

This doesn’t mean the U.S. economy is recession-proof—far from it. It does mean, however, that investors shouldn’t equate weakness in one or two sectors—even housing and autos— with the end of the economic expansion. This thinking is seeping into the psychology of the markets, which we believe is premature and misguided.  Case in point: the U.S. manufacturing sector. While many investors are under the assumption that the U.S. is not in the business of making “stuff” and that America’s manufacturing capacity has either been allowed to atrophy or be shipped to low-cost locales like China and Mexico, nothing could be further from the truth.  Simply put, America is a manufacturing superpower. Exhibit 1 highlights America’s global share and rankings based on 22 different manufacturing categories, ranging from food and beverages to basic metals to motor vehicles. The numbers come from the United Nations and are based on 2016 data, the last year of available data.2 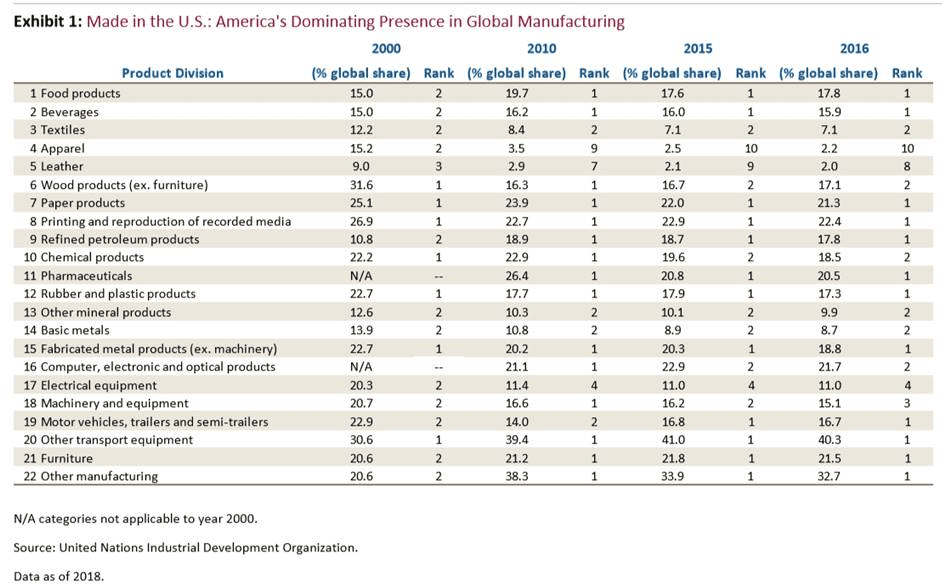 Here are some stunning takeaways:

Beyond various manufacturing activities, think agriculture and energy—two sectors where, again, the U.S. ranks as global powerhouses. Hardly on the screens of most Americans, the U.S. agricultural sector is among the most abundant, varied and tech-driven in the world. No country in the world produces as much food as efficiently as the United States.

Then there is energy, with the fracking revolution over the past decade triggering nothing less than an energy renaissance in the United States. To wit, the U.S. is now the world’s largest crude oil producer in the world, topping Russia and Saudi Arabia for the title earlier this year.4 In August 2018, U.S. crude oil production topped 11 million barrels per day (b/d) for the first time in history; that’s a far cry from the less than 4 million b/d production levels in mid-2008. In addition, last week the U.S. became a net exporter of crude oil and petroleum products for the first time on record, according to U.S. Energy Department data going back to 1973.

Finally, there are services—yet another dynamic, multi-sector component of the U.S. economy. Think professional and business services, with output totaling nearly $2.5 trillion in 2017, more output than the entire economy of Brazil (Exhibit 2). And that’s just for starters. Finance, real estate, health care, retail, information services, arts and entertainment, transportation— many of these activities produce more annual output than most countries. Such is the dynamic characteristic and range of U.S. services—on a global basis.

So what does all of the above mean for investors?

It means the following: Because of America’s hydra-headed economy, we believe the economy is relatively well-positioned to withstand and move forward next year in the face of mounting headwinds related to trade, a flattening yield curve, soggy growth in Europe and other concerns. The markets have not come around to recognizing America’s underlying strengths amid a whirl of challenges. Given the competitive composition of the U.S. economy, we believe the bull market rumbles on, with equity returns in 2019 expected to track earnings growth of 5%-6%.

Investors are hung up on where the U.S. economy is in the cycle. That’s important for sure. But even of greater importance is the diversity of U.S. output.

The post The American Economy – A Hydra-Headed Superpower appeared first on ValueWalk.