Opinion: The bear market of 2018 gets more aggressive and painful as the year comes to a bitter end. Bitcoin has suffered quite an excruciating fall ever since it reached an all-time high back in December 2017.

The market cap of Bitcoin has slumped from a massive $336 billion to $60 billion, which is a massive decrease of ~82%. The altcoins have followed Bitcoin and most of them have also declined by 80% since their all-time highs.

Apart from the bear market, the US Securities and Exchange Commission [SEC] has tightened the noose around ICOs, causing a sharp decline in fraudulent ICOs and exchanges.

Many enthusiasts had also pinned down the hash wars between Roger Ver and Craig S Wright that ensued this year to have played a crucial role in Bitcoin breaking the $6,500 support and collapsing as low as $3,200.

Despite the bear market, crypto enthusiasts find something to look forward to, something to hope for. In their mission to find the light at the end of the tunnel, a Reddit user MATURBO, and other Redditors have unearthed videos of a YouTuber called davincij15, who used to post videos about investing in Gold and Silver back in 2009.

The Reddit thread posted by MATURBO discusses and claims that the person could actually be Satoshi Nakamoto. Although this seems like a far-fetched speculation, there are certain points that Davinci spoke about in his videos that might sway the decisions of people who are skeptical.

The Redditors are surprised with his “accurate predictions” of a lot of major events in the Bitcoin ecosystem.

On June 1, 2011, he posted a video titled “The power of Bitcoin vs Gold and Silver”, in which he spoke about Bitcoin and how it was revolutionary.

In the same video he said:

“I don’t know why you don’t see how this is a new powerful currency that will change the landscape of the internet and probably the rest of our world. Gold and silver are always going to be the money, but this allows you the convenience of sending somebody money all the way around the world.”

“… correct me if I’m wrong but there’s a lot of central authorities have been cheating us over the past hundred years… but this new bitcoin currency allows us to operate globally in a fast and efficient manner so we can operate locally with our silver and globally with bitcoins.”

On a video dated January 26, 2013, and titled “Remove your bitcoins from Mtgox”, he suggested users to “abandon Mt. Gox” and “move their money out from Mt. Gox” as Mt. Gox was being attacked by the US government and banksters.

Surely enough, on August 5, 2013, Mt. Gox announced that it incurred “significant losses” due to crediting deposits which had not fully cleared and that new deposits would no longer be credited until the transfer of funds was fully completed.

To make matters more interesting, on December 4, 2017, a video titled “Bitcoin Price Comment” he said that Bitcoin has saturated and that people should not buy Bitcoins at this point. He stated:

“and I still think you should you should take some profits I mean close to $20,000…I cannot endorse someone buying bitcoins right now so that’s my comment.”

In the same video he also said:

Now, this might all seem like a long shot, but apart from actually talking about Bitcoin, he has made videos about investing in silver and gold.

While speaking about gold and silver and giving his opinion on it, he addresses a few real-world problems in the financial sector, like the paper money, centralization by governments, middle-man fees etc.

“Yep paper gold is a fraud! Keep your gold it does not require anyone to pay it back.”

“A dollar today is worth more than a dollar in the future. Why? Because the Federal Reserve and the government are creating it like crazy and they are not going to stop. Whatever you decide to do try to get the payment as small as possible interest only if you can.”

He also talks about the short-comings the banks had and have while addressing a need for “monetary freedom”, which were among the reasons why Satoshi Nakamoto developed Bitcoin in the first place.

“Maybe not a gold standard but monetary freedom where anyone can accept anything as money and contracts are enforced by law.”

Taken aback by his accurate predictions, redditors are speculating that he could be the real Satoshi Nakamoto.

“This guy understood the concept behind bitcoin and what it could actually mean for e-commerce before 99.99999999% of others did. It wasn’t FOMO, it wasn’t luck, he understood the basis of bitcoin. One of his comments was “One day those same 10 coins will get you 10 oz of gold”. I’m positive this guy is a multi-millionaire now if he kept that mindset and kept mining.”

“What if this guy is Satoshi nakamoto. He is still vouching for Bitcoin to this day btw”

“I’ve been following him and the thought has crossed my mind, he moved to a discreet location in Chile and he’s a software developer…. hmmm”

EuW_MadWard suggests him being the real Satoshi as he commented:

“To the question “Are you holding BTC now and/or buying?” he replied:
“Yes and no it’s complicated”.
That’s because he’s Satoshi, and he’s technically “holding” BTC just because if he didn’t the whole thing would come crumbling down.
We found him gents!”

After reaching out to him about the whole Reddit claiming him to be the real Satoshi Nakamoto, he replied saying that he was just a normal person. 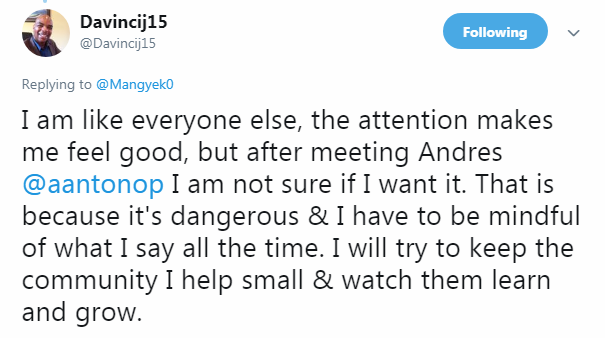 Davinci denied being the actual Satoshi Nakamoto, be that as it may, he also predicted that Bitcoin would be revolutionary and change the way we do payments. He even warned his audience to clear off funds from Mt. Gox before it happened and even advised users to take off some profits at $20,000.

It could have been sheer luck if what he predicted was right just once, but three times in a row seems like a lot more than luck. He is either well-informed or the actual Satoshi Nakamoto as the redditors are discussing.