The latest buzz in the cryptocurrency eco-system in the first week of December is the wager made by the Morgan Creek Digital’s Anthony Pompliano aka Pomp, and the tragedy that has befallen the crypto-verse as Bitcoin plunges, testing new lows.

Nouriel Roubini was invited to bet against the performance of cryptocurrencies and S&P 500 index in a 10-year period by Anthony Pompliano.

The wager by Pomp is a page out of American business and investor magnate, Warren Buffet’s playbook. Buffet bet a brobdingnagian $1 million that the S&P, an index fund, would outperform five actively managed hedge funds. Buffet won that bet in 2017 and proceeded to donate his winnings to a charity.

Anthony Pompliano did the same thing but instead, bet that cryptocurrencies, in a span of 10 years, would outperform index funds, S&P 500. The bet, now being called as the “Buffet Bet 2.0”, invites any investor who believes otherwise to get on the other side of the bet.

In his tweet, Roubini said that the Bitcoin and cryptocurrency’s meltdown is continuing and that is nothing but a “pile of baloney manure nonsense”. 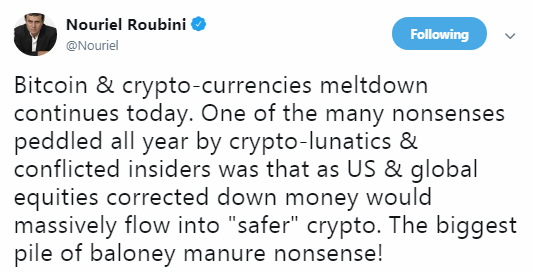 To this, Pomp tweeted saying that he was more than welcome to take the other side of the “Buffet Bet 2.0”. Pomp tweeted:

“You in to take the other side of this bet if you think crypto is going to zero?”

Roubini replied to him in subsequent but different tweets. 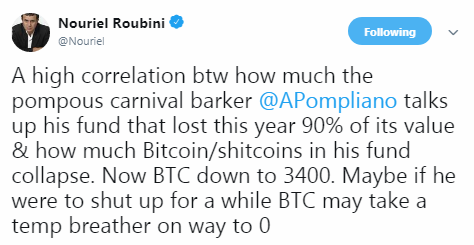 “Everyone can check out our index fund at http://www.digitalassetindexfund.com Thanks for the shout out, Nouriel!”

Mark Yusko of Morgan Creek retweeted Roubini’s tweet asking him to take the other side if he is so confident about the cryptocurrencies failing. 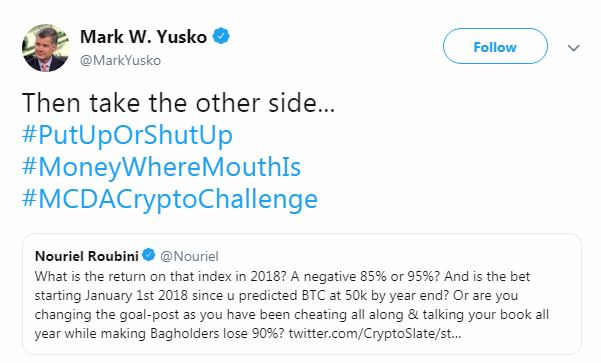 “Haha love it Pomp! You revived Buffett’s bet and gonna play them at their own game. Balls of steel!
Roubini would be the perfect candidate to accept the bet, but we all know he’s too cowardly. Bark but no bite.”

The post Nouriel Roubini invited to bet against the “Buffet Bet 2.0” by Anthony Pompliano appeared first on AMBCrypto.