Seems like the feud between Mark Yusko, Anthony Pompliano and Nouriel Roubini continued after the “Buffet Bet 2.0” but on a different front. Nouriel Roubini said that Mark W. Yusko, who is the founder of Morgan Creek Digital, invested in fraud of the year and escalated the matter even more.

Mark Yusko was “psyched” as he announced the purchase of Blockchain Terminal for Morgan Creek Digital, from BCTerminal. 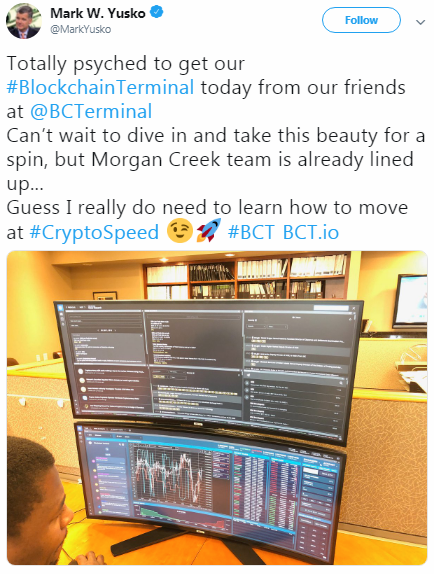 Nouriel Roubini being himself, retweeted Mark W. Yusko’s tweet saying that Yusko just invested in the “scam of the year”.

He referred to recent fiasco of Blockchain Terminal ICO, which was led by a man who everybody believed was named Shaun MacDonald but turned out to be a former hedge funder named Boaz Manor, who was sentenced to prison in 2012 for fraudulently running an $800 million hedge fund.

Nouriel referred to this scam in his tweet and said:

“Brilliant @MarkYusko U just invested into the scam of the year. All this after losing 80+% for your investors this year in your crypto shitcoin fund! Good you moved from one failure to the next! Keep digging in that cesspool now with a shitcoin terminal!”

To Roubini’s tweet, Yusko quickly retaliated saying that they never invested in the company but only “demo’d” the terminal just like everyone else. 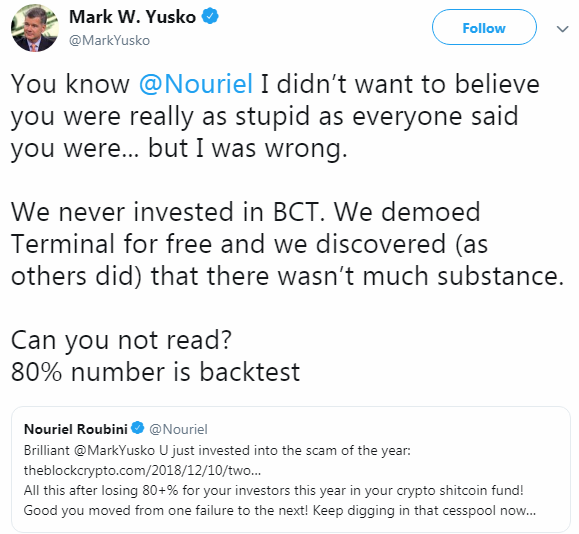 “No one invested in the company from Morgan Creek. You’re wrong….again.
Just like your call to sell Bitcoin at $58.
You teach at a university that riddles students with crippling debt in exchange for a worthless piece of paper.
What’s the real scam here??”

“And again he gets what he wants. What he is yelling for.He needs it like air to breath. He’s addicted to attention. Please don’t give this guy what he needs. It’s obvious that he is knowingly spreading nonsense and half-truths.He wants to play a role but he is obsolete.ignore him”

The post Nouriel Roubini has a new bone to pick with Morgan Creek Digital founders as they invested in “scam of the year” appeared first on AMBCrypto.