Anthony Pompliano, a Bitcoin enthusiast and the founder of Morgan Creek digital asset recently set off a bet, now being called as the Buffet Bet 2.0, putting $1 million at stake. The bet by Pompliano is a competition between the performance of S&P 500 index and cryptocurrencies as a whole.

Roubini being himself had an opinion on this bet and bad-mouthed Pompliano and his bet, which led Pompliano to invite him to go against the bet. The feud continued as Roubini took to his Twitter saying that Pomp is “changing goal posts” and “talking books all day”. 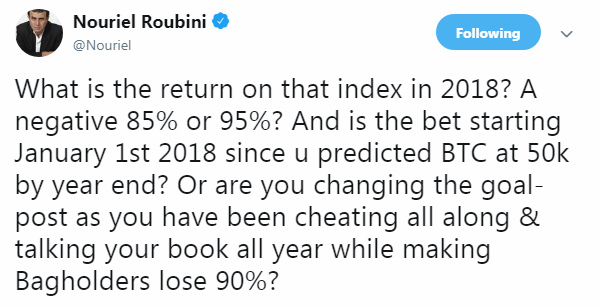 “Talk is cheap. You taking the bet or going to Monday morning quarterback this one?

If you want to check out the index, you can see it here digitalassetindexfund.com”

On December 10, Roubini erupted the feud again when he Tweeted:

“You take bets only when there is no counter-party risk, ie when the side losing the bet is still there to pay it. The loser pompous @APompliano who lost 80% for investors in his shitcoin fund is only seeking attention with his bet. His fund will be BUST/GONE well before 10 years”

Pompliano replied to him saying that Roubini was the candidate for the worst call of the decade.

Mark W. Yusko, the co-founder of Morgan Creek Digital also replied to Roubini’s above-mentioned thread saying that there was zero counter-party risk in the “Buffet Bet”.

A Twitter user Bitvillain replied to the same thread:

“Sounds like an easy win for you Nouriel. I think there are plenty of good charities that you could donate your winnings to. Take the bet! Surely the odds of crypto beating the S&P 500 over 10 years is close to zero. What could possibly go wrong?”

Meanwhile, on the other side of Twitter-verse, an S&P believer, Jim O’Shaughnessy, Chairman & Chief Investment Officer, OSAM, bet against the cryptocurrencies in his tweet saying that he was up for the bet. 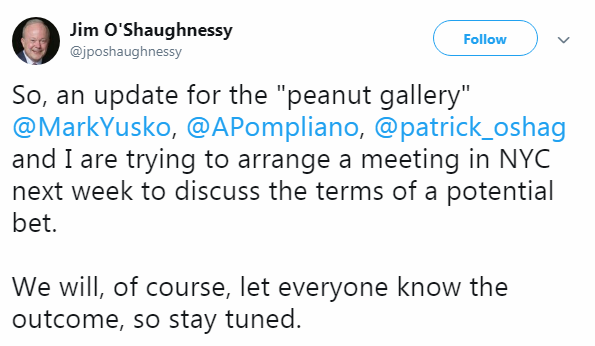 O’Shaughnessy in subsequent tweets said that the bet was not going to happen. He tweeted:

“[email protected] won’t do it, @patrick_oshag (my son, the least-millennial millennial I have ever met) is tired of talking about crypto, so, no bet from us. Ah well…
#SavedYouaClick”