As societies evolve, wealth shifts occur. This happens for many different reasons, but it always has a profound impact on quality of life for those earning less money. Global income inequality is a problem all over the world, with many people living in poverty while a small percentage control the majority of the world’s wealth. Some countries, like Denmark, Slovenia, and the Czech Republic, have more income equality than countries like the United States, which has seen wages stagnate in recent years. Even though global income inequality has dropped since the 1970s, we’re far from solving the problem. 71% of adults worldwide do not even have $10,000 in wealth, while others make billions. 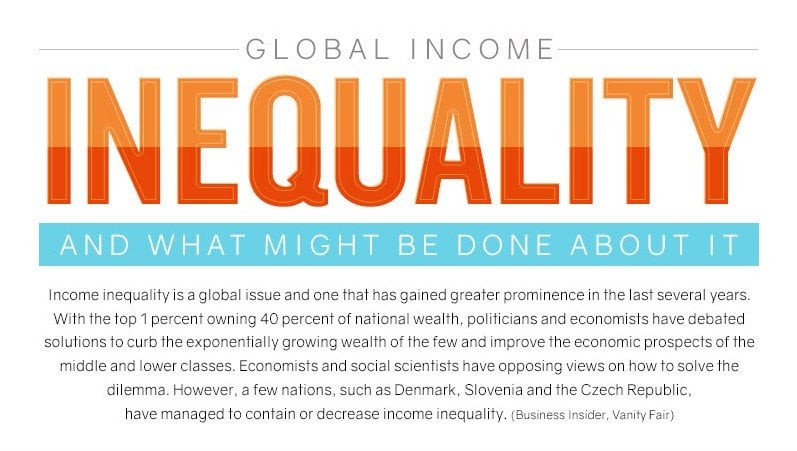 Income inequality is a complex issue, but there are two major factors that impact global income inequality: decrease in population growth and higher returns on private investments than economic growth. These two factors mean that inequality increases and concentrates wealth to a few individuals. Trade also plays a major role in wealth equality. China, which focuses on exports, has grown its middle class, while the United States, which imports many goods from China, has seen wealth stagnate in the middle class and grow in the top 1% of Americans. Trade, which used to be only a minor part of the economy, is making up a bigger and bigger share—30.03% in the US and a whopping $85.35 in Sweden.

What Can Be Done?

Obviously, there’s no simple answer to the problem of global income inequality. Transparent and democratic trade policies, changes in laws to crack down on sheltering money, impose progressive income tax and create a living wage, and encouraging union membership could all play a role. For more detailed information, Norwich University’s International Relations program has created an in-depth infographic.

The post Not Just An American Issue, Global Income Inequality Is Massive appeared first on ValueWalk.