Monero’s lead developer, Riccardo Spagni aka fluffypony, spoke about Basic Attention Token [BAT], elucidating why he considers it to be centralized in the latest episode of Magical Crypto Friends.

Basic Attention Token is the digital currency used for rewarding content publishers and users for paying attention to the content, a break-through in the digital advertising sector. This also provides advertisers with more in return for their advertisements. For the very same purpose, Brave Browser browser monitors the users’ attention, while ensuring that the data does not leave the users device.

However, the Spagni stated it has a loophole on Twitter:

“I just found out that BAT has a nice loophole that lets them steal funds from users. Permissionless scamovation indeed! […] Users are NOT going to go & buy BAT when their airdropped tokens run out, no matter how slick. There’s simply too much friction. Consider what happens RIGHT NOW when most people hit a paywall: do they (1) disable their ad blocker, (2) pay the publisher, or (3) just close the tab?”

This was followed by a Twitterati, Patrick, stating that the BAT ecosystem is designed to work in manner wherein the advertisers purchase the tokens and then use them to buy advertising space on the browser. He further stated that users will earn 70% share of the revenue if they agree to view the ads, adding that they will be paid in BAT for their attention and can tip this BAT to their preferred content producers.

To which, Spagni said:

“I understand that part of it, and I think it’s safe to disregard it as (1) it’s going to be gamed making it a race to the bottom for ordinary users, & (2) very few people want to see a plethora of ads even if they’re getting paid. I also think the browser lock-in is shortsighted.”

To counter this statement, Patrick attached a tweet of Brendan Eich, the co-founder and CEO fo Brave, wherein he has remarked that Brave uses Uphold for KYC/AML process, which is required for users to be able to withdraw their funds. This is so that “the threat is DoS not theft by fraud”.

The founder added that they make use of Proof of Browsing and “buffering on the device and in a settlement, allowing anti-fraud/Sybil attack analysis and BAT claw-back”. 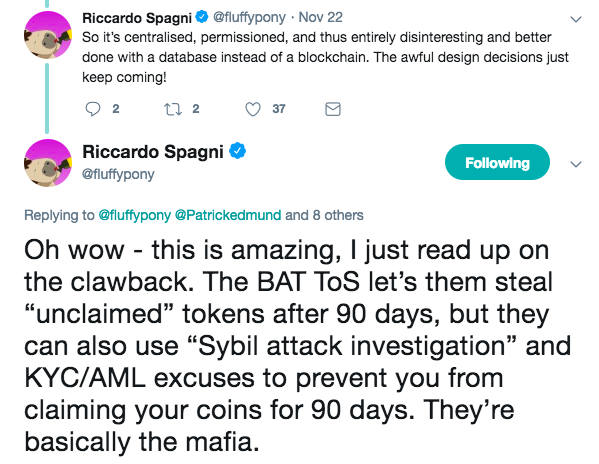 In the episode, Spagni stated that he found it interesting that it is “a lot more centralized than they purport to be”, adding that this is true when it comes to a lot of dApps. He further stated:

Following this, Spagni spoke about Proof of Browsing, which will determine whether the ‘attention’ is true or not, whether it is a  human or a bot, and callback if a person is taking advantage of the system. The developer stated that if a user fails to complete the KYC/AML process and Proof of Browser, then the money is taken back from the user.

The post Monero [XMR]’s Riccardo Spagni: BAT is lot more centralized than they purport it to be appeared first on AMBCrypto.