Charlie Lee aka Satoshi Lite, the creator of Litecoin, could quite possibly be the most underrated person in the crypto-community for his genuine and honest character. However, more importantly, he is respected for his accurate forecasts about the cryptocurrency market, especially about Litecoin.

Back in 2017, when cryptocurrencies gained wide-spread notoriety and caught the eye of mainstream media, Charlie Lee supported SegWit when the whole of the community was against it. There were massive FUDs surrounding SegWit and how cryptocurrencies obtained via SegWit transactions were similar to “anyone-can-spend” coins.

Alan Silbert, in an effort to eradicate this FUD, posted on Twitter a $1 million SegWit bounty to prove that SegWit coins were “anyone can spend”.

However, nobody could prove the FUD right and Bitcoin eventually integrated SegWit and the bounty was taken back. Lee also tweeted that he was the one who put up the bounty on September 30, 2017.

“It was you all along!!? Talk about putting the money where your mouth is!”

To this, Lee replied:

“Well, I wouldn’t risk a $200MM (at that time) currency with a risky upgrade if I didn’t believe in it myself.”

Lee made a smart bet, betting against SegWit2X, which was a proposed hard fork for Bitcoin by Mike Belshe, Wences Casares, Jihan Wu, Jeff Garzik, Peter Smith, and Erik Voorhees. The fork was supposed to take place on November 16, 2017.

Lee, in a Twitter post, posted a 1:1 trade to trade his SegWit2X 250 BTC for a non-SegWit2X 250 BTC. This trade was placed for the hard fork supporters Jeff Garzik, Erik Voorhees, and Barry Silbert.

The fork fell through due to lack of consensus among the community members and Charlie Lee triumphed once again.

The third amazing prediction by Charlie Lee was when Litecoin was doing very well in the bull market of 2017. Lee said that sometimes the price of a cryptocurrency shoots higher than the actual or fair price. He even sold all his holdings in Litecoin in December 2017 just to satisfy the rumors and comments. 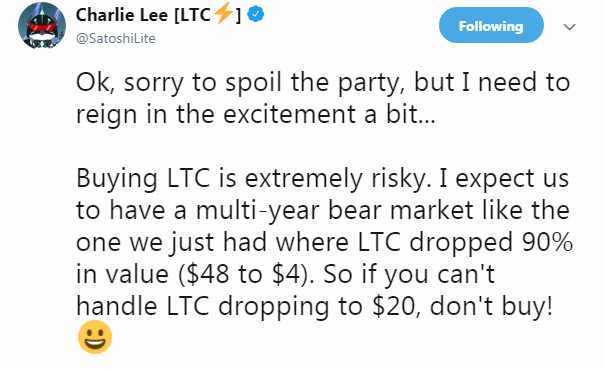 Most people who were holding Litecoin then were really agitated and distraught with Lee posting something which could negatively affect the prices.

“Why would you say this… just why.. this the typa shit that would actually make the price fall ffs.”

“If one tweet calls the price to fall, then it doesn’t deserve that price in the first place.”

“Would a Google CEO come out and say don’t buy GOGL because it is risky and can go down 80%?”

While some people were upset about him tweeting about prices, some were really appreciating him for the heads-up.

“Just sold my entire holding of LTC! Thanks for being honest. I wouldn’t sell otherwise”

“Not ONE person asked you Charlie WHY you expect a “multi-year bear market”, a term most have no idea what that is. But I’ll ask: Why? Especially with the CBOE/CME/NASDAC involvement & the fact these are on everyone’s radar screens?? I get consolidation, but bear market?!?”

“When crypto goes up too fast, it overshoots its real value. So a bear market to consolidate is normal. How long and how large is anyone’s guess.”

Lee even went as far to add a tweet of a surprised and flabbergasted crypto-enthusiast to his twitter moments section, The Crypto Monk.

The prediction came true as the bear year approaches the end, and Litecoin did indeed overtake Bitcoin Cash on December 14. 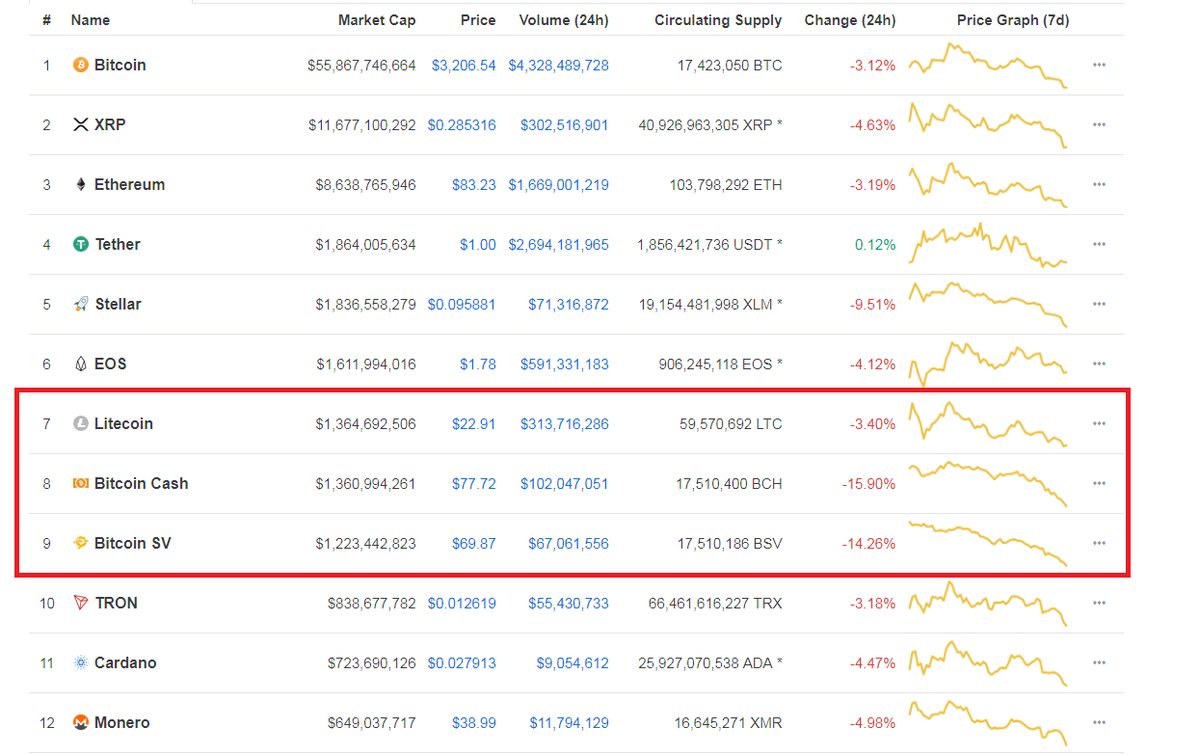 Back in September 2017, Lee sat down for a friendly discussion with Roger Ver, known for his promotion of Bitcoin Cash and more commonly known as Bitcoin Jesus. The discussion turned into a debate and ranged from ‘if Bitcoin does have intrinsic value?’ to ‘advantages of the Lightning Network [LN] over Bitcoin Cash’.

Ver went on a limb and bet against Lee, saying that less than 1,000 merchants would be using LN in 18 months. The bet took place during the blockchain cruise in the first week of September 2018.

“I’ll bet you that in 18 months from now, there will be less than a thousand merchants of the world excepting lighting network payments for for physical goods.”

Sure enough, the LN adoptions sky-rocketed and is yet to cross over 1,000 merchants with Coingate, a popular cryptocurrency exchange, launching its own LN for Litecoin. Lee posted a tweet about it on December 13 saying:

“Even Litecoin will soon have more than 1,000 merchants accepting LN payments!

Coingate tweeted that LN will be up and running soon enough on the same day. 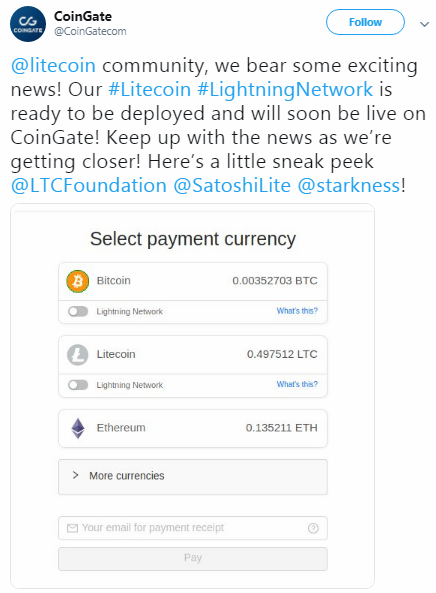 The Lightning Network has not yet been rolled out for Litecoin, but the CoinGate team is finalizing plans to do so.

In its official blog, CoinGate posted:

To summarize, Lee has always had investors’ best interests at his heart and unlike what most people believe, Lee has been very accurate with his predictions when it comes to cryptocurrency market and above all, a humble human being.

The post Litecoin [LTC]’s Charlie Lee and why betting against him is a mistake even the best could make appeared first on AMBCrypto.