Charlie Lee, the creator of Litecoin expressed his joy of overtaking BCH by retweeting a gif doing rounds on Twitter. Lee tweeted:

The flappening refers to a previous tweet by the creator of LTC that dates back to February 25. Lee tweeted: 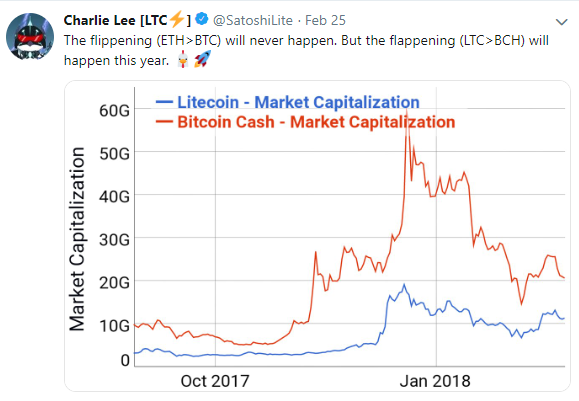 In early 2018, when Ethereum boomed, many speculated it to overtake the biggest cryptocurrency Bitcoin [BTC]. However, Lee, the Ethereum skeptic denied the possibility and instead, said that his cryptocurrency, LTC, could overtake Bitcoin Cash [BCH].

The Litecoin community responded to Lee by launching an LTC vs BCH data aggregator called Flappening.watch, which was in line with Lee’s ‘Flappening’. They also used Lee’s mascot, a chicken in an armor. Even though BCH was way ahead of LTC for most of the year, it ultimately crossed BCH on Friday.

“Even Litecoin will soon have more than 1000 merchants accepting LN payments!

On Friday, BCH started to surrender and fell below its support point. Meanwhile, LTC started recovering and bounced off its lowest $22.5 standing. Lee pointed at his prediction and took to Twitter to share his joy with a tweet which contained three emojis, a chicken, flying dollar bill and a rocket added to a gif.

Flappening.watch reported LTC to have registered a market cap of $5 billion higher than that of BCH and had 384% more active addresses, 340% higher daily transactions, and 288% more in trading volume. CoinMarketCap reflected this change in the standings of the two coins with LTC on the seventh position.

However, LTC and BCH are playing the game of power and are constantly undergoing changes, which is impacting their standings on cryptocurrency list. As on December 15, the coin plunged and was back to the eighth position, yet ahead of BSV. The coin recorded an overall fall of 6.09% at the time of reporting.