The cryptocurrency market has seen a sudden surge in its prices after an extended bear run. Popular cryptocurrencies like Bitcoin [BTC], XRP, and Ethereum [ETH], were all passengers on the bull rocket after one-hour charts showed massive spikes.

A majority of the cryptocurrency’s trade volume was occupied by BitMEX, with a total hold on $1.261 billion worth of Bitcoin. BitMEX was closely followed by CoinBene, which had 3.52% of the entire Bitcoin trade taking place on the platform. 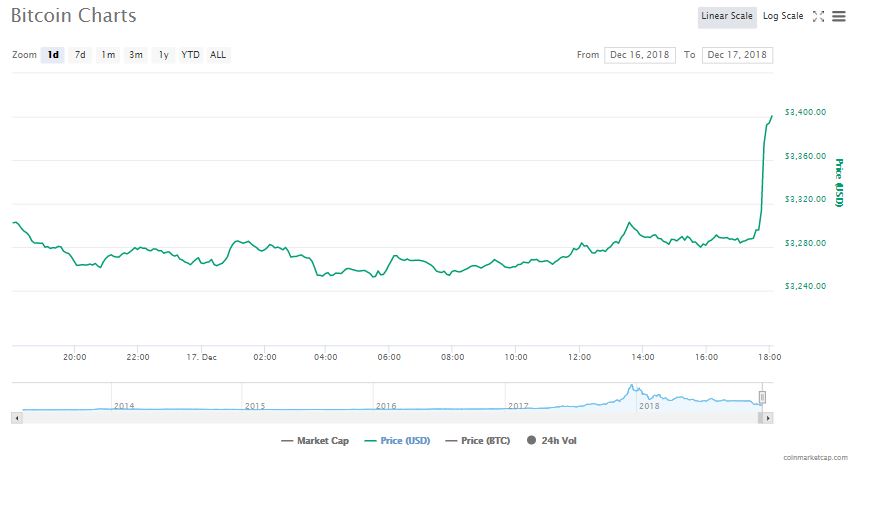 The spike saw Bitcoin climb from $3,228.3 to $3,400.68 in an unprecedented vertical climb. Bitcoin was also in the news recently when Erik FInamann, a teenager who ended up becoming a Bitcoin millionaire during the 2017 bull-run, stated that the cryptocurrency was dead. In an interview, said:

“Bitcoin is dead, it’s too fragmented, there’s tons of infighting I just don’t think it will last. It may have a bull market or two left in it, but long-term, its dead.”

Bitcoin’s time in the spotlight was also extended by Tone Vays, a popular trader and one of the cryptocurrency’s major proponents. He had said that Bitcoin’s use cases is more than a Store of Value and is a hard set currency that will benefit the people. In his words:

The post Flash hike: Bitcoin [BTC] rockets on the price charts as cryptocurrency surges by 4% in an hour appeared first on AMBCrypto.