Ethereum [ETH], the third biggest cryptocurrency by market cap, is currently the center-point of the cryptocurrency space because of the recent comments made against the project by Tuur Demeester, the Founder of Adamant Capital. The Founder outlined the reasons he is against the leading project on his official Twitter handle, which resulted in gaining the attention of several well-known influencers in the space.

Demeester started by stating that even though Ethereum claims to offer the same solutions like decentralization, immutability, and smart contracts, like that of Bitcoin, the architecture and culture is the complete opposite. He added that since it is considered a crypto blue chip, it “colors perception of uninformed newcomers.”

This was followed by the Founder stating that he has been following up with Ethereum since 2014 and that it is his responsibility to share his “concerns”. According to him, the third biggest cryptocurrency “is at best a science experiment” and the current valuation, i.e., $13 billion is too high.

Following this, Demeester remarked that he is in complete agreement with the statement made by Vlad Zamfir, an Ethereum developer’s statement made in early 2017. Here, the developer had stated that Ethereum is neither safe not scalable, but was merely an “immature experimental tech.” The developer had even advised people to not work on the network for mission-critical apps unless absolutely necessary. 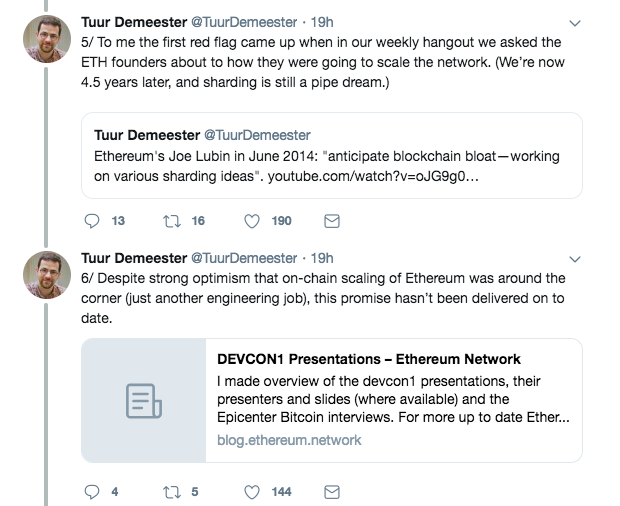 Additionally, the Founder also pointed out the criticism made against Casper’s white paper, stating that “it does not live up its own claims”. The peer review was conducted by a group of developers including Vlad Zamfir, wherein he states that the white paper does not result in neither the “theoretical sound nor practical useful treatment of Byzantine fault-tolerance”. It mainly points out that it is unclear whether the definition of Casper protocol family “provides any meaningful safety guarantees” for the Ethereum blockchain, or whether this approach could be applied to scale blockchains.

“8/ On the 2nd layer front, devs are now trying to scale Ethereum via scale via state channels (ETH’s version of Lightning), but it is unclear whether main-chain issued ERC20 type tokens will be portable to this environment.”

Demeester went on to compare this with the evolution of Bitcoin’s Lightning Network and stated that it is currently live and is witnessing growth at a “rapid clip”. He said:

“11/ In 2017, more Ethereum scaling buzz was created, this time the panacea was “Plasma”. 12/ However, upon closer examination it was the recycling of some stale ideas, and the project went nowhere: 13/ The elephant in the room is the transition to proof-of-stake, an “environmentally friendly” way to secure the chain. (If this was the plan all along, why create a proof-of-work chain first?)” 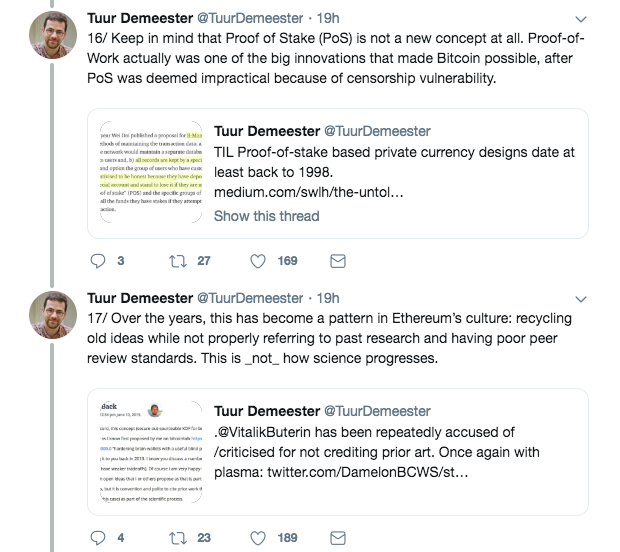 He went on to say that his main concern is that “sophistry and marketing hyper” are the main factors contributing to Ethereum’s success so far. The Founder added that the overly “inflated expectations” has resulted in an “inflated market cap”.

The post Ethereum [ETH] “is at best a science experiment”, says Founder of Adamant Capital appeared first on AMBCrypto.