Ethereum Classic [ETC], one of the leading projects in the cryptocurrency space, has been in the limelight because of the turmoil in the community. Now, the Ethereum Classic Labs has stepped into the spotlight to tell their part of the story.

Earlier this month, one of the development teams, Ethereum Classic Development Company, released a public statement that they will be shutting down their operations. This came across as a blow in the entire community, as majority of them believed that it was the only development team, however, the community has two other development teams: ETC Commonwealth and IOHK.

Additionally, the team has been working towards the development of the ecosystem since the DAO hack, which was the main cause for the chain split that resulted in the existence of Ethereum and Ethereum Classic.

The reason for shutting down the operation is stated to the inadequacy of funds by the founder and CTO of ETCDEV, Igor Artamonov. He has stated on Twitter:

“As is publicly known we have struggled with funding our operations in the last few weeks. This was partially due to the market crash, combined with a cash crunch in the company. We appealed to investors in the ecosystem as well as external to it. We also did o the community fund, but in none of those cases were we successful in securing short term financing”

This was followed up by Igor speaking about the entire situation on his blog post, in addition to the GitHub situation. Few days prior to the announcement of shutting down, the team announced that they lost control over their GitHub account, including Classic Geth, one of the main clients of Ethereum Classic.

Igor had stated that he had lost access to the funds which were procured for the development of the company. Following this, he sought assistance from Ethereum Classic Labs, the team that provides financial assistance for the advancement of the ecosystem, and DFG. Furthermore, he provided access to a representative of DFG, krykoder on their request, who then removed everyone’s admin access. 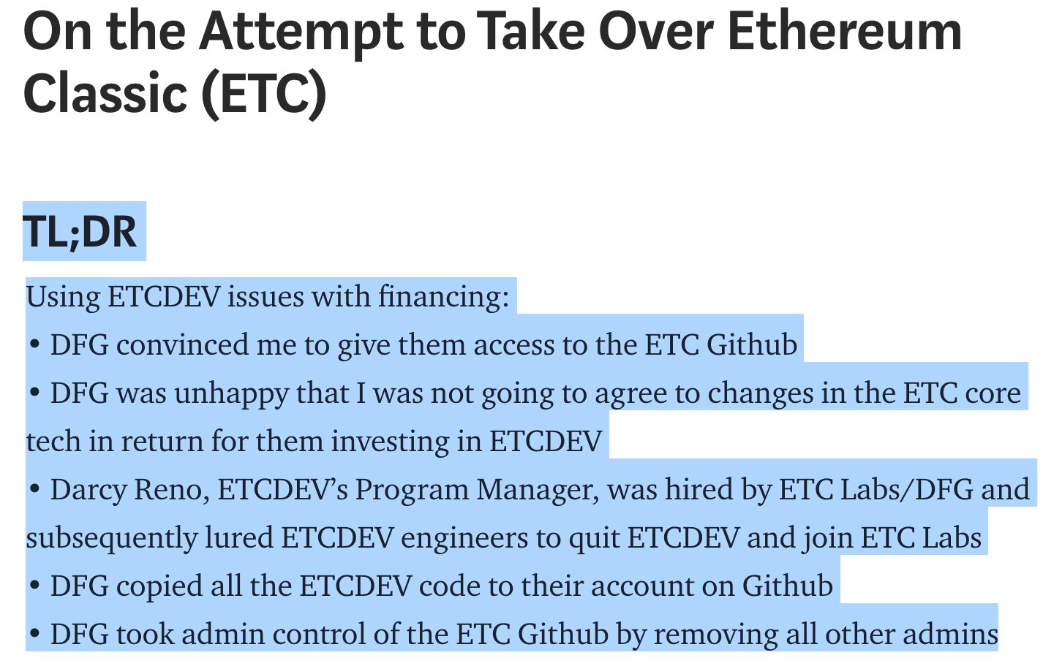 Now, the ETC Labs team has published a statement on the incident, remarking that the team lead by Igor consisted of an excellent developers who contributed to the growth of the ETC after the split. Nonetheless, this was followed by the team claiming that the overall “ecosystem lags way behind and the gap between ETC and its competitors has grown wider”.

“During the past year, ETC Labs has fully supported ETCDEV, ECC and other parts of the ecosystem. However, we are sorry to have discovered some fatal flaws such as: some people only care about their own status and power in the community instead of the future of ETC, some of the most vocal people take no action, and different parties lack cooperation. All these have contributed to ETC’s lack of development.”

ETC Labs stated that prior to this, Ethereum Projects Github account had three admins apart from Igor, adding that Cody Burns was the “only active” one among the four of them. However, they claimed that Burns barely made contribution to the core code and also failed to provide constructive advice. The report also stated that Burns and Igor “actually formed a highly-centralized decision-making system” because of which there were several ideas that were “rejected and wasted”. They stated:

“We are aware that removing other owners would bring criticism and misunderstanding, but we’re determined and willing to shoulder that, because it’s truly a “now or never situation.” Also, we fear nothing because we are truly and fully committed to the future of ETC, and we have absolutely zero malicious intentions. Our goal is to revolutionize the ETC community and to inject competition, vigor and democracy into the ecosystem.”

Following which, they stated ETC Labs and Krykoder are not going to be the only admins of the Github, and that “multiple appropriate owners will be added to manage the resources in a democratic and decentralized manner”.

“We also noticed the revolution has begun to take effect. Some people are becoming busy, and we hope they are busy doing the right thing for ETC. Our congratulations to Mr. Cody for becoming the owner of the ‘new’ repo as he wished, and we hope the new repo does well, for the sake of ETC”

Nonetheless, this statement also drew the Igor’s attention, who said: 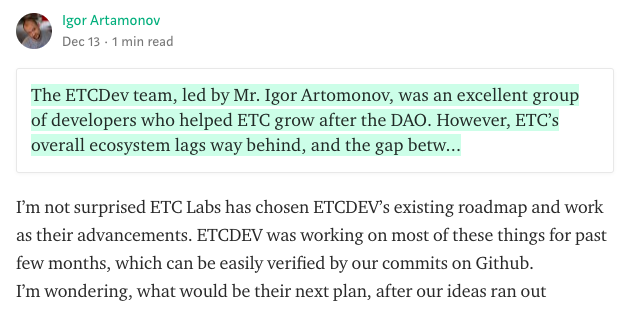 The post Ethereum Classic team: Our goal is to revolutionize the ETC community and inject competition, vigor and democracy appeared first on AMBCrypto.