The bear market maul has continued with several cryptocurrencies seeing visceral bleeds. Many cryptocurrencies also saw position changes on the cryptocurrency chart, an event that saw market cap changes and overtakes. Bitcoin [BTC], Ethereum [ETH] and EOS have not stopped falling on the price spectrum with double-digit drops becoming a common sight.

At the time of writing, EOS was spiraling by 20.85% with a total market cap of $1.581 billion. The cryptocurrency was trading for $1.75 and was holding a 24-hour market volume of $820.937 million. A majority of the trade volume was held by OKEx which had a grasp on 13.71% of the total EOS trade. OKEx was followed by DOBI trade, which controlled $72.406 million worth of EOS on the network. 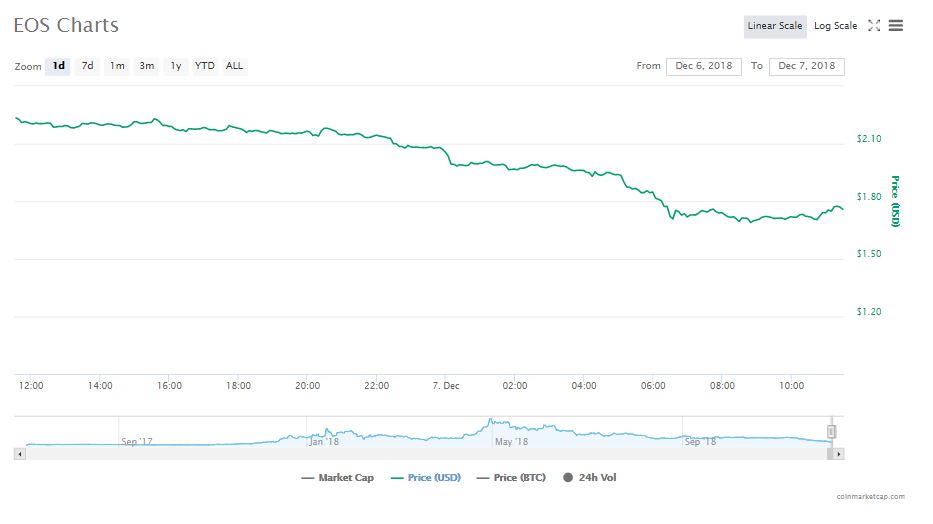 December has not been kind to EOS proven by the fact that since December 1, the cryptocurrency closed at a lower price than the previous day. Over the past week, EOS has been severely wounded by the bear with recent reports showing that the cryptocurrency has dropped by more than 30% in a seven-day time frame. It has also lost its position as the fifth-largest cryptocurrency after the climb of Stellar Lumens [XLM] and Bitcoin SV [BSV].

Bitcoin SV has made a splash in the crypto verse as it is the only cryptocurrency, other than Tether, that is enjoying a bullish run. The rise has been substantial too, with Bitcoin SV spiking by more than 18%.

The EOS community had some reason to rejoice recently when it was revealed that EOS had the most number of transactions compared to any other cryptocurrencies, even surpassing that of Ethereum [ETH] and Tron [TRX]. The finding also showed that EOS and Tron cumulatively contributed to 82% of all cryptocurrency transactions.