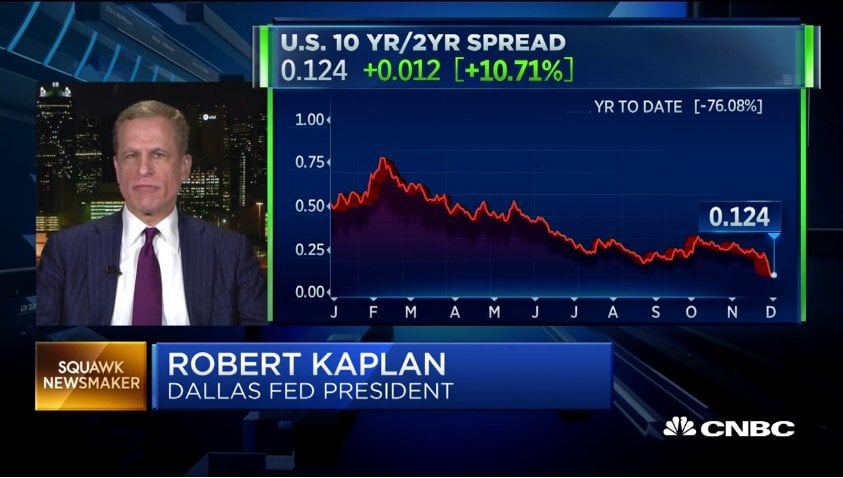 The following is the unofficial transcript of a CNBC interview with Dallas Fed President Robert Kaplan and CNBC’s Steve Liesman on CNBC’s “Squawk Box” (M-F 6AM – 9AM) today, Thursday, December 6th. The following is a link to video of the full interview on CNBC.com:

STEVE LIESMAN: I mean, you’re — It’s not just great you’re here on day when the market’s down 400, we’ve got major questions about the outlook for the Fed, but you’re also the guy to have because you’re a former Goldman guy. So tell us about the message that you’re getting from markets here; the recent selloff and especially the 2/10 spread, which is — I’m saying it’s up a little bit this morning, but crazy saying it’s up twelve basis points between the two. What’s the message about the markets, Robert?

ROBERT KAPLAN: Well, let me start with the 2/10 spread. And you’ve heard me say this and I’d emphasize what I’ve been saying: the short end of the curve has been acting to what the fed is saying. The longer end of the curve tells me that expectations of future growth are sluggish. And what I see in the stock market, and I obviously am a student and have worked with companies my entire career and am a student of earnings reports, I’m seeing input costs are rising. Tariffs are a part of it, but it’s not the only part of it. And companies — many of them are struggling to pass on those cost increases to their customers. And you’re seeing margin erosion. And you’re also seeing deceleration of expectations for next year’s earnings growth which are off a high base. And so, when you put all of that together, I just think there’s a lot more uncertainty. And it’s very consistent with what I hear from companies I talk to and what we see in our surveys. And I think the implications for me and my job as a central banker, I think getting to 2, to 2.25, I’ve had a lot of confidence that we should be moving along. I think at this stage, you’re going to hear me be much more cautious and counsel patience. I think there’s more uncertainty, global growth’s decelerating. I’m seeing interest rates showing some weakness. It’s too soon to say what to make of it. But I think one of the key tools we have with Central Bank is patience, and I think we ought to be using that tool.

STEVE LIESMAN: Robert, I want to give you some credit because you were talking back in mid-October about getting to the range of neutral, before the leadership at the board was talking about the range of neutral. Are we at neutral now possibly or how far below it? I mean, do you still think we need to get there?

ROBERT KAPLAN: So, neutral is by its nature imprecise and uncertain —

STEVE LIESMAN: Sure. Sure.

ROBERT KAPLAN: — and you’re not going to see it on your screen. So I think the range at the FMOC and our longer run rate is somewhere between 2.5 to 3.5. I’m at the lower end of that range. And so, my guess is we’re probably a little bit below neutral, but we’re approaching it. We’ll know in hindsight where neutral was. But I think normalizing monetary policy was always going to be challenging and I think we’re in the stage of this process where you’re going to hear me shorten up on the prognostications and be much more vigilant as to what’s going on in the economy. But particularly, not just the data, but what the outlook is, and what the markets are saying about the outlook and what companies are saying. And right now, I’m just seeing a high level of uncertainty. And I think it’s a factor in my thinking.

STEVE LIESMAN: Robert, I’ve got to be direct about this, only because we’re coming up quick on the meeting, and you guys are going to enter a blackout period where you won’t talk at all.

STEVE LIESMAN: And I know one thing you don’t want to happen is for the market to be mispriced going into the meeting. But here we are with a 76% probability of a rate hike in December. Is that too high?

ROBERT KAPLAN: You’ve talked to me enough to know that I’m not going to comment on the market probabilities.

STEVE LIESMAN: I know, but I have to go right at it, Robert.

ROBERT KAPLAN: And I would just say my comment would be: I think we ought to be very gradual and patient here. Inflation, in my judgment, isn’t running away from us. The Dallas Trim Mean, which we just published over the last week, shows muted levels of inflation growth on core inflation — our reading of it. So I think we have the luxury of patience. And I’m not going to judge or predict what we’re going to do in the December meeting. Obviously, I’ll have a strong point of view going into that meeting. But I think we ought to be patient. There’s a good possibility, and I’m very attune to the possibility, if not the probability, that the economy is going to look very different in the first half of 2019 than it does today, because fiscal stimulus is waning and we’ve raised rates eight times over the last 2 ½, 3 years. So I think all of that means we ought to shorten up on our assessments and be willing to be very patient.

ANDREW ROSS SORKIN: Robert, we’re all trying to make sense, especially this morning, of the relationship that the U.S. has with China. What’s happening, whether the relationship is devolving, whether it’s coming back. Obviously, we’ve seen swings even just over the past week. Take us inside the room or at least take us inside your own thinking of how that’s going to impact rates here in the U.S. and how the fed thinks about it.

ROBERT KAPLAN: So, there’s two aspects I’d comment on in that regard. One is the trade tensions. And while headline GDP growth hasn’t been effected by them, I can tell you first hand, companies are widely affected by the trade tensions. Either steel, aluminum, or the retaliation back from the steel/aluminum tariffs, and uncertainty created. Two thirds of the companies we survey, and we’ve got a very corporate base in the state of Texas, tell us that either their input costs are already up because of it or they’re uncertain and it’s having some chilling effect on their business decisions. So this relationship with China is part of that. The second part, China is a big percentage of global growth. And they’re using more leverage to meet their 6.5% GDP target. So far, the U.S. economy has been outperforming the rest of the world. But we’ve got to keep in mind, eventually, if global growth slows, we’re not going to be immune to that. And 45% of S&P 500, by the way, company revenues come from outside of the United States, so it’s not affected headline GDP growth here yet but I think there’s a decent chance you’ll see it spill over into it if this goes on for long enough or intensifies.

STEVE LIESMAN: Robert, can you hang on one second? I want to tell people what the ADP payroll numbers are, 179,000 reporting for November. These are a day late because of the funeral yesterday. That’s against an estimate of 190,000. October numbers were revised – 225,000 just down to 200,000 so that strong October number remains. Goods sectors up 16,000. Services 163,000 and there’s the nonfarm payroll estimates. So a little bit below it. I wouldn’t expect any changes out there. And guys, just skip to the industry graphic here, and we’ll just look at that real quick, if you don’t mind — if you could get there. The education services always a leader there, 49,000. Leisure/hospitality, 26. Good growth across construction, up pretty strong. Manufacturing maybe a little bit lighter than it has been but being on the positive side is still good. Can I get some guidance, do we have time to go back to Robert for one final question? Is that alright?

STEVE LIESMAN: Robert, I just want to ask you — Joe gave me permission — who is running the show here?

STEVE LIESMAN: Robert, thanks for sticking around. First of all, the jobs outlook is pretty good. The econ data has been pretty good. I mean, the ISMs were good, we get an ISM today on services. Is the worry, to use a craps metaphor, on the come here, or is the real worry right now in any of the data you’re looking at it? And could we get past this thing and all of a sudden the outlook is rosier back towards 3% growth?

ROBERT KAPLAN: Yeah. Well, our own forecast at the Dallas Fed is you’ll see growth move down from 2 to 2.5 next year. We’re — I’m not predicting and we’re not predicting a recession. We’re just saying that the fiscal stimulus will fade somewhat. And back to the job growth numbers: job growth numbers have been very strong, which tells me and it tell us that there’s been more – you know, more women are entering the workforce and I think the data shows high school and less. People are coming off of disability. But the demographic trends in this country, the aging trend suggests workforce growth is going to slow. The big and ponderable for the next year is: is productivity growth going to jump more than we expect, but I’m a little skeptical about that. So —

ROBERT KAPLAN: I don’t think it’s going to be a bad year in 2019. But I think growth will be slower.

ROBERT KAPLAN: And I think these uncertainties we’ve talked about, we have to watch very carefully. And that’s why I’m just counseling patience, as we assess all of this information.

STEVE LIESMAN: Okay. Robert, it’s a credit to the Dallas economists at the Dallas Fed there that you knew months ago when we planned this we were going to need you on today, with the market down 400, and questions about the outlook for the Federal reserve. Thank you for joining us President Kaplan.

The post Dallas Fed President Robert Kaplan: Growth Will Be Slower In 2019 appeared first on ValueWalk.