The United States and Exchange Commission [SEC] has always played a key role in the cryptocurrency space. The regulatory body is well-known in the space for taking action against fraudulent ICOs and dubious advisors. Moreover, the commission has made a clear point that everyone involved in the space are required to abide by the rules and regulation laid down with their recent actions.

However, the commission has always taken the spotlight and is more popular for their stance on the Bitcoin ETF, the exchange traded fund which has been the most awaited product in the cryptocurrency space. So far, the commission has not approved a single proposal for the rule change, with their main concern being market manipulation. Additionally, the rejection of the Winklevoss ETF was met with a dissent from one of the commissioners, Hester Peirce, who has earned the title of “Crypto-Mom” for her move.

The key player in terms of the ETF at present is the SolidX VanEck Bitcoin ETF, which was proposed earlier this year. The commission recently delayed the decision of the ETF, postponing it to February 27, 2o19. Nonetheless, VanEck continues to be optimistic on SEC’s decision as they believe that they have fulfilled all the pre-requisites required for its approval.

Jake Chervinsky started by stating that the exchange traded product is “in trouble” and that there is a possibility that the market is not ready for an ETF just yet. He said:

“2/ When we last discussed the ETF on September 20, the SEC had just stated its “grounds for disapproval under consideration.” The goal of that step is for the SEC to explain all the reasons why it might deny the ETF so the sponsors & the public can respond to them all.”

Succeeding which, he spoke about the most important factor the commission has always pointed at, market manipulation. He said that during the CBOE BZX proposal for a rule change, the commission had queries related to the “surveillance-sharing agreement with a regulated market of significant size”, which according to him is the “most important question”. The lawyer remarked that this was the main basis upon which the Winklevoss ETF was put down by the commission in July 2018, post their initial denial in March 2017.

“And the Winklevoss appeal denial is the most important SEC decision because it came straight from the Commissioners. 5/ For context, a surveillance-sharing agreement would involve a crypto exchange voluntarily giving detailed information to CBOE about its order books & operations, including trading data & customer identification. The SEC could then require CBOE to turn that information over.”

The lawyer further elucidated that commission finds a surveillance-sharing agreement necessary in order to satisfy the Exchange Act 6[b][5]. The rule states that an exchange product fund has to be designed in a manner that it can prevent fraudulent and manipulative acts and practices, along with protecting investors and the public interest.

On this, Chervinsky said:

“7/ The SEC is basically saying it needs to be able to detect manipulation on the underlying spot & derivative markets where bitcoin is priced to be certain that the ETF itself isn’t being manipulated. Whether that’s the correct view is another matter (@HesterPeirce says no).”

“9/ The SEC is leveraging its power over the ETF process to fix that problem. By rejecting bitcoin ETF proposals that don’t include surveillance-sharing agreements, the SEC is essentially saying to sponsors: “we can’t surveil exchanges on our own, so you’ll have to do it for u”

This was followed by him stating that the problem faced by ETF sponsors is that cryptocurrency exchanges do not want the SEC “looking into their books”. Additionally, some exchanges even block the US IP addresses in order to stay outside the commission’s jurisdiction, he said:

“It’s hard to imagine those same exchanges agreeing to surveil their clients for the SEC 11/ Plus, the SEC says it’s not good enough to have an agreement with any old exchange: it has to be with “a regulated market of significant size. However, the SEC hasn’t precisely defined that term, so ETF sponsors are left guessing as to which exchanges would be sufficient.”

Chervinsky also stated that there was another way to satisfy the rule, the sponsor has to prove that the market is “inherently resistant to fraud and manipulation. This was the path which was chosen by the Winklevoss brother, however, it was turned down due to insufficient data proving the claim.

“14/ In response to the SEC’s grounds for disapproval, both CBOE and SolidX filed comments explaining why the ETF satisfies Exchange Act § 6(b)(5), in addition to rebutting the SEC’s other concerns. 15/ Both CBOE and SolidX make great points about the surveillance-sharing agreements they’ve entered & the increasing maturity of the bitcoin markets. They include a particularly good argument about the role of OTC trading […]” 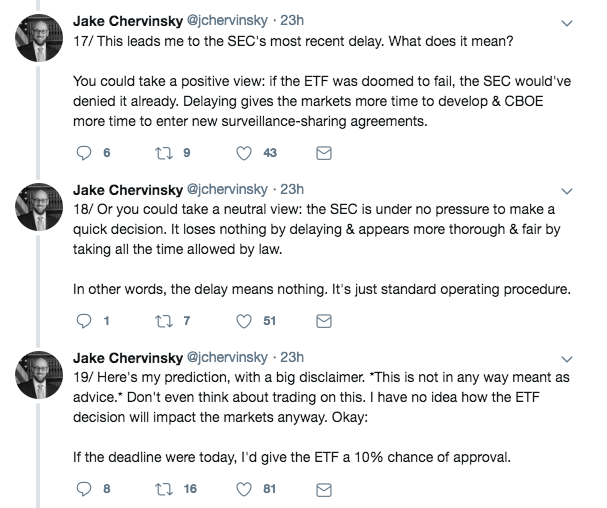 He concluded by stating:

“20/ My prediction is based largely on the manipulation issue. I think the chance of ETF approval will go up over time as market structure continues to develop & more surveillance-sharing agreements are entered. The question is: how high can it go before the February 27 deadline?”

The post Bitcoin ETF would have had a 10% chance of approval if SEC had to make the decision today, says Lawyer appeared first on AMBCrypto.