After assessing the market and the most recent trends, analysts of the international cryptocurrency trading platform PrimeXBT have offered a forecast: they expect the Bitcoin exchange rate to rise above $ 6,000 in the first quarter of 2019, despite the Q4 skid that saw the world’s premier digital asset hit low after low. Both technical and fundamental analysis confirm the theory. 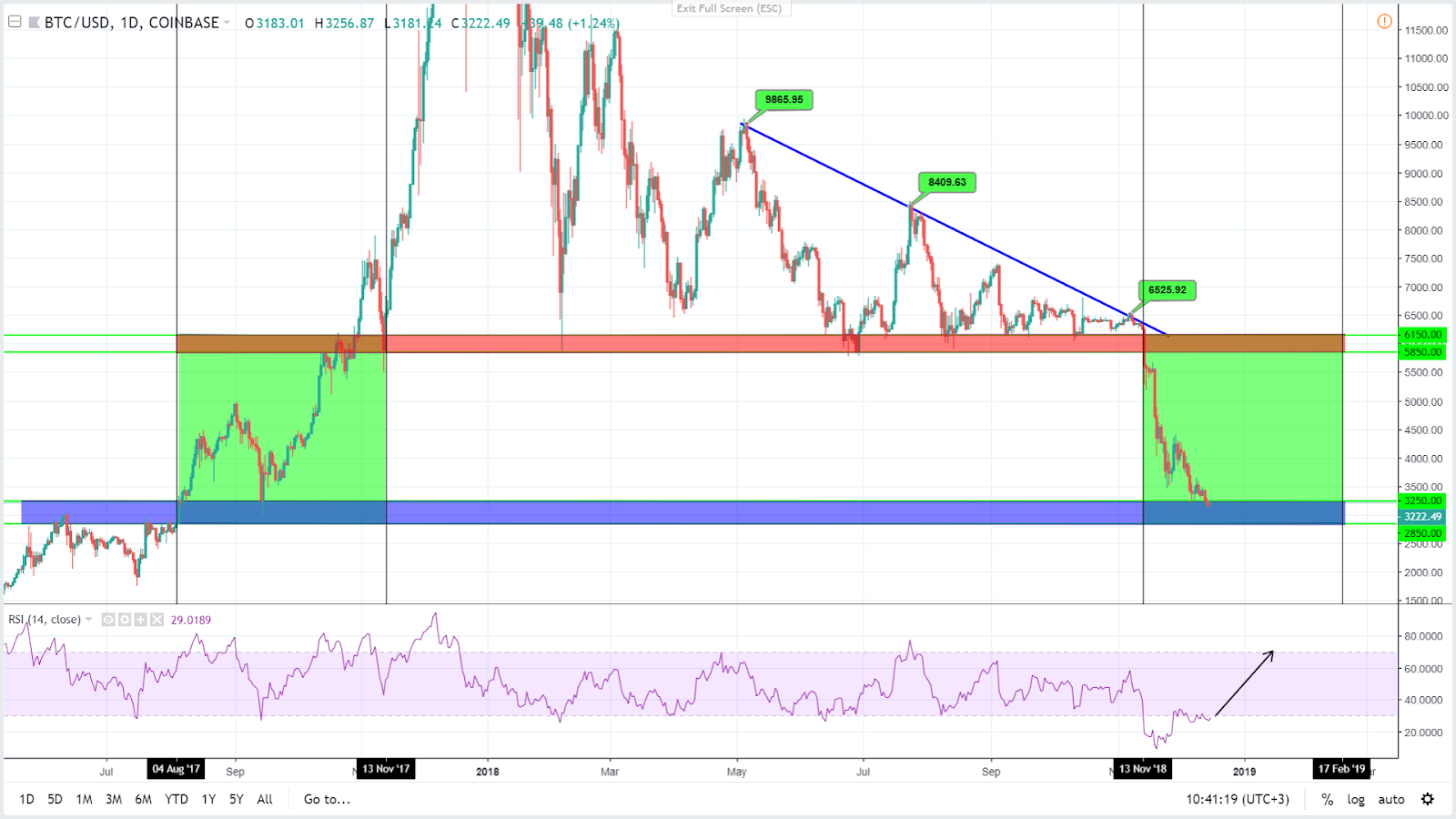 The fact that the breakdown below the $6,000 mark took place exactly one year after the price rebounded from this price level, followed by a rally to $20,000, is quite interesting. Now, the $6,000 level will not be easy to surpass, as it is a very strong resistance mark in Bitcoin’s history.

The price level of $ 3,000 [range $ 3,250 – $ 2,850] is an equally important historical mark, which resisted the bulls until August $4,2017. It’s impossible to break $2,850 and even lower when it comes to Bitcoin’s value because of the strength of this price level and relative strength index [RSI indicator], which is below 20, a number that is considered a strong oversold zone and gives a signal to the traders to buy, thus maintaining the price.

As a result, Bitcoin is “sandwiched” between two powerful price levels in the green corridor, approximately until the end of the first quarter of 2019. Strong fundamental events will help it to get out of the corridor, either above $6,000 or below $3,000.

Since 2014, traditionally in early January, Bitcoin significantly drops in value:

Given the statistics of the previous five years, it is likely that a drop of 25-35% in the first half of January occurs. And yet, the minimum price of 3,000 is unlikely to be broken, because also traditionally, before the New Year, Bitcoin is growing, eliminating possible future losses. The technical analysis adds a pre-New Year positive development, indicating oversold RSI in the area of ​​a strong support line. As a result, we can expect an increase in prices to $4,200 – $4,500 until the end of 2018, followed by a return to current prices, $3,600 – $3,200, in the first half of January.

One of the most anticipated events in the cryptocurrency world will tentatively take place on January 24, 2019: the Bakkt cryptocurrency platform for trading Bitcoin futures contracts regulated by CFTC [Commodity Futures Trading Commission] will be launched. The creator of this platform is ICE Futures U.S., the operator of the New York Stock Exchange. In fact, the guys from Wall Street come into play, which marks the arrival of large institutional investors and the official recognition of Bitcoin as a financial instrument.

This event should have a strong positive effect on the market and bring Bitcoin back to $ 6,000 or more by the end of January.

If the release date of the Bakkt platform were to be postponed for any reason, then the opposite situation is entirely possible, which would mean a fall in the exchange rate. The most impactful negative market reaction would take place if the delay occurs due to the fault of regulators.

Contrary to the popular belief that the Chinese New Year has a negative impact on the cryptocurrency market, the situation is the exact opposite. While it is true that Bitcoin sank from $825 to $560 during the New Year celebrations in China in 2014, the drop was caused by DDoS attacks on the largest cryptocurrency exchange of that time, Mt. Gox, which after two months announced its closure. It was an isolated event.

What happened in other years? Recall that the Chinese New Year, in contrast to its Western counterpart, does not have a permanent start date and each year the date of the celebrations is set for a different time.

As can be seen from historical data, Bitcoin grew by an average of 20% during the celebrations of the Chinese New Year. Accordingly, this event, which will take place from February 5 to February 20 in 2019, can be considered a positive fundamental factor.

In April, the positive dynamics can continue thanks to news coming from Japan. Yahoo Japan plans to launch a cryptocurrency exchange in the Asian country, based on BitARG Exchange Tokyo, from which it acquired a 40% stake for $ 19 million in April 2018.

Bitcoin has quite favorable arguments for further growth and price recovery above $6,000. It is worth noting that many analysts agree with that notion and forecast 2019 as being quite calm for Bitcoin, but extremely harsh for altcoins. In particular, experts expect the “death” of 90% of all tokens issued at the entrance of the ICO, the reincarnation of the ICO itself as STO (Security Token Offering) under the supervision of the SEC and regulators from other states.

There is also Hardfork Constantinople, which can both help Ethereum and once again divide the community into two camps, and many other events that are based on the bitter experience of previous years and will only benefit the cryptocurrency market.

How can I earn while owning this information?

To get started, register for free on the PrimeXBT trading platform: it won’t take more than one minute. There is no identity verification on the network, so you can start trading immediately.

Does it make sense to trade with such a small amount? No, it is pointless. However, the PrimeXBT’s trading platform provides its clients with adjustable leverage from 1: 1 to 1: 100, which allows them to increase not only the capital of newbies but also significantly increase profits for experienced traders.

What to do if the forecast was not justified and the market went down? Open trades for sale and make money on a falling market. On PrimeXBT, it is possible to open short positions using the maximum leverage of 1: 100, which is impossible on other trading sites.

What to do if purchase deals have already been opened? Open opposing trades using leverage, thereby hedging risks.

In addition to the advantages mentioned above, the PrimeXBT trading platform has some significant features that help traders to conduct comfortable and successful trading:

Stay tuned for news and analysis from the PrimeXBT trading platform. You can register for free on the official website and trade without limitations.

The post Bitcoin course forecast for the first quarter of 2019 from PrimeXBT analysts appeared first on AMBCrypto.