The constant highs and lows in the cryptocurrency market have diluted the faith of investors and garnered a promising response from Calvin Ayre on their loss of faith.

Ayre in his tweet acknowledged the scare of the investors and said:

“no surprise here with what BTC and ABC have done to try to kill scaling so they could run their very stupid side chain experiments.”

Ayre did not forget to brag about how scaling BSV is going to be a game changer. Ayre added:

“this year we show everyone what scaling to enterprise levels really means with Bitcoin SV.”

“It is a superior technology, head and shoulders above any other chain, and this has been proven when we mined a 64 MB block on the BSV chain last week. No other crypto platform is even close to scaling this much, and this is only the beginning of BSV’s scaling road map.” 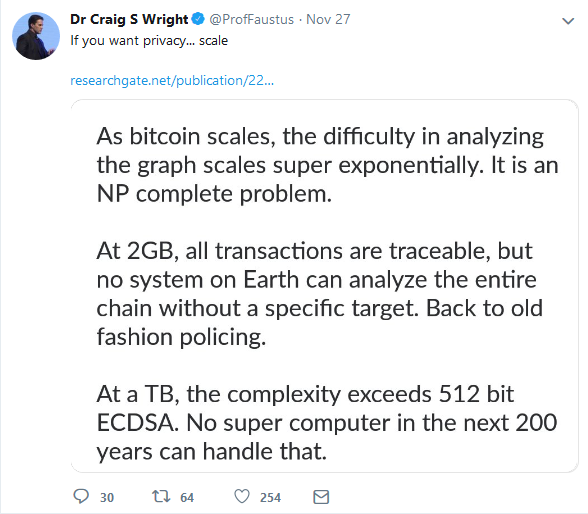 Wright had added in one of his tweets that Lightning is a “dead-end” concept and that they “will be scaling Bitcoin on-chain”. Wright and Ayre have been in agreement about scaling BSV while dissing other coins, especially ABC.

Many tall promises have been made on the duo’s end when it comes to BSV’s future. However, what comes as an advice from Wright’s end is to convert all assets to a “mix of BSV, gold and Real estate”, in order to survive the “big crash coming”.

The post Bitcoin Cash SV [BSV]’s Calvin Ayre says, “this is only the beginning of BSV’s scaling road map” appeared first on AMBCrypto.