The recent bull run in the cryptocurrency industry saw massive spikes that acted as a survival kit for a lot of coins in the bear’s throes. The price surge also enabled popular cryptocurrencies like Bitcoin [BTC], XRP and Bitcoin Cash to [BCH] to rise up to the top of the cryptocurrency charts, spearheaded by Bitcoin’s resurgence above the $4,000 mark.

The biggest winner, however, in the top 10 cryptocurrency club over the past week was Bitcoin Cash [BCH], clocking an increase of a massive 153.25%.

Reports also show that Bitcoin Cash is not just the winner in the top 10 club, but among the first 100 cryptocurrencies as well. The cryptocurrency’s performance also saw BCH climb to the fourth position on the cryptocurrency charts, a position it had held on for the longest time before the bear’s onslaught.

At the time of writing, Bitcoin Cash was growing by $33.71% in a 24-hour margin with a total market cap of $3.814 billion. BCH was trading for $217.63 along with a 24-hour market volume of $2.001 billion. Majority of the cryptocurrency’s volume was held by Upbit, with a grasp on $329.096 million of the total BCH trade. Upbit was closely followed by LBank, which saw 10.58% of the entire BCH trade taking place on the cryptocurrency exchange. 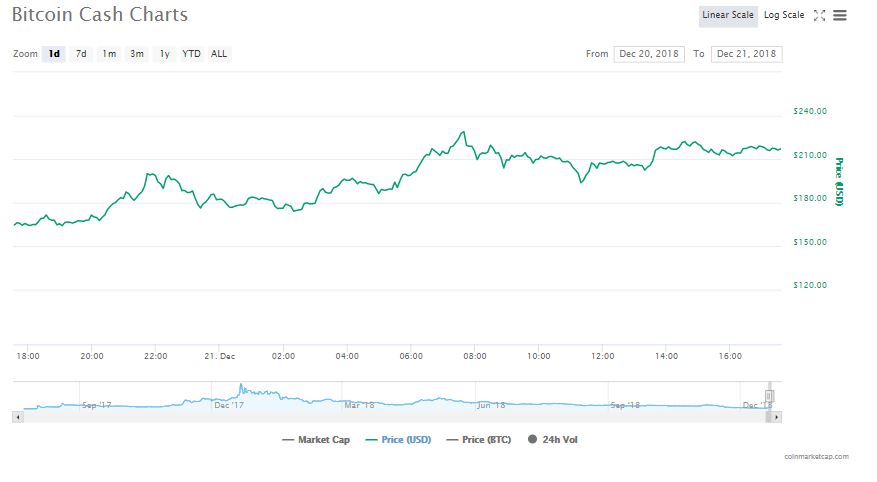 Bitcoin Cash was also in the news recently when Roger Ver, one of the cryptocurrency’ biggest proponent called out Litecoin by stating that it is pointless. Gemini, the Winklevoss brothers co-founded cryptocurrency exchange also gave a boost to BCH when it listed the fourth largest cryptocurrency on the platform. The official statement by the company stated:

“At this time, we will only be providing support for the Bitcoin ABC network and we will be referring to it as Bitcoin Cash with ticker: BCH. We have added replay protection to all BCH withdrawals from the Gemini platform to ensure transactions are only valid on the Bitcoin ABC blockchain.