The cryptocurrency market has been seeing multiple downtrends and uptrends over the past few weeks and the end-of-year scenario looks to be positive for the market. After the price drop on Christmas day, Boxing Day seems to have put a smile on the face of investors and users after significant price hikes. The biggest gainer amongst the top 10 cryptocurrency club was Bitcoin Cash [BCH], with the cryptocurrency keeping up with its title of ‘biggest weekly gainer’.

Upbit was closely followed by Huobi, a popular cryptocurrency platform on which 9.65% of the total BCH transactions took place. The rise from its Christmas Day dip has been more than a blip, with the cryptocurrency rising from $160.3 to a peak of $184.44 on December 26. 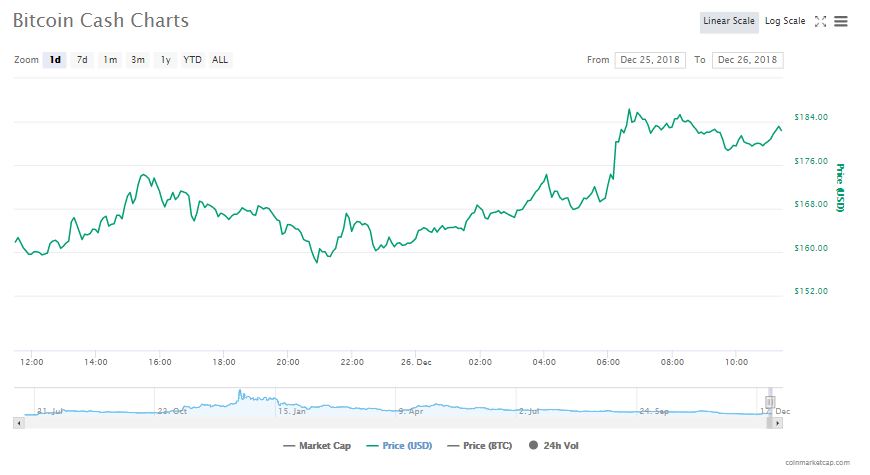 Bitcoin Cash was also in the news recently when Roger Ver, the CEO of Bitcoin.com and a major Bitcoin Cash proponent spoke about the new updates and developments on the BCH network. Ver majorly talked about Cash.coin.dance, Coinbase’s new conversion feature and Open Swap. Coinbase’s updates were part of the Brian Armstrong led company’s ’12 days of Christmas’ concept. The exchange had tweeted:

“As a crypto-first company, it’s important that we build features that let people take advantage of the unique attributes of cryptocurrency. That’s why we’re beginning to roll out a new feature called Convert, which customers can use to convert one cryptocurrency into another.”

The post Bitcoin Cash [BCH] hikes by 13%; gets its presents on Boxing Day appeared first on AMBCrypto.