Bitcoin, the world’s largest cryptocurrency, is no longer down in the dumps. The prices of Bitcoin have increased dramatically by more than 8% as of December 18, and have been up there for quite a while.

The king of the cryptocurrencies has come out of its hiding, causing every other cryptocurrency to follow its lead, with some increasing more than Bitcoin in terms of percentage increase of prices. 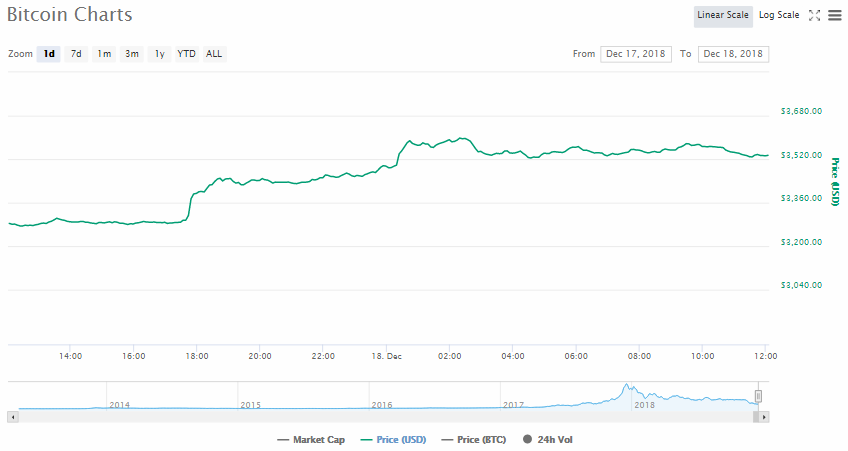 The prices saw a gradual increase, which led it to climb as high as $3,450. Post this point, the prices held their ground steady without faltering. Bitcoin saw a price increase of ~9.53%, which was the highest Bitcoin ever reached in the 24-hour time frame mentioned above in quite a while. The prices gave another go at the rally, but exhausted again at $3,597.

The volume for the rise in Bitcoin doesn’t indicate a significant amount, which could further mean that this is probably not the bull run that everybody in the community thinks it is.

As seen from the chart, there is a major resistance at ~$3,775 range and even if BTC does decide to take off now, without actually reaching the sub $3,000 range, it wouldn’t necessarily have the ‘juice’ to have a strong rally. As a result, it would have an ephemeral run or a ‘fake-out’.

“$BTC – This is one of the only scenarios I would long.

If BTC breaks back into the previous daily range (3770 – 4382) without hitting sub 3ks first I’ll be mildly bullish.

Until then, I’m comfortable shorting bounces.

“Huge fan of your analysis, as you know. But I’ve got slightly different views here.

This is the most bullish PA we’ve seen in a little while and I’m looking for longs above 3430.

If we lose that, I’ll surrender and admit you’re right and short to sub 3k :)”