On 7th December, a popular Twitterati and a cryptocurrency space influencer who goes by the social media name WhalePanda posted three graphs on his Twitter account. The graph depicted an apt correlation of the two biggest altcoins, XRP and Ethereum [ETH] with Bitcoin [BTC]. Here, WhalePanda also wrote:

“No matter how centralized your coin is, of how many “devs” you have working on your alt… It will always follow the Bitcoin lead.
Bitcoin gives value to all the projects.”

In another tweet, the influencer also wrote about the popular opinion going around regarding the decoupling of altcoins with Bitcoin. WhalePanda propagated that the crypto-members holding such opinion realize their flawed view only when the bear market hits, and subsequently blame BTC from the decline of their respective coins.

“In the bull market altcoiners are talking about “the decoupling” with Bitcoin.
In a bear market they realize they were wrong & blame Bitcoin for the decline in price of their bags.
What they should realize is that Bitcoin is king. If Bitcoin becomes worthless so will their alts.”

After the battle started within the Bitcoin Cash [BCH] ecosystem, the damage splurged around the diameter of the whole cryptocurrency space as Bitmain, one of the biggest mining layers in the industry took a step back in mining Bitcoin. This led to a major crash as all the coins across the board turned red. 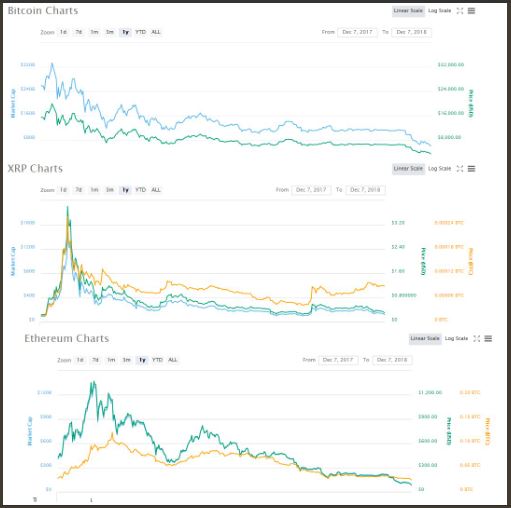 During this period, a few key changes in the cryptocurrency ranking took place, one of them being the overtake of Ethereum [ETH] by Ripple’s XRP. Here, XRP showed great potential for decoupling from Bitcoin as it remained the only coin to have pleased the bull amidst a bearish storm.

However, XRP has finally crashed Bitcoin’s after-party and is being assaulted by the bear, as all the other altcoins remain in the red.

“They were not wrong. I think altcoins are de-coupling just fine at the moment…” – DK