Crypto-savant Bobby Lee, a well-known Bitcoin’s enthusiast in the community, tweeted explaining when to buy Bitcoin and when to sell it.

In his tweet, Bobby Lee explained when to buy Bitcoins, the first being after completely understanding how Bitcoin is a revolutionary form of sound money. Bitcoin revolutionized p2p transactions through its underlying technology, the blockchain, which keeps the records safe and is immutable and it runs on a complete decentralized network, meaning, no central or controlling authority has control over it. 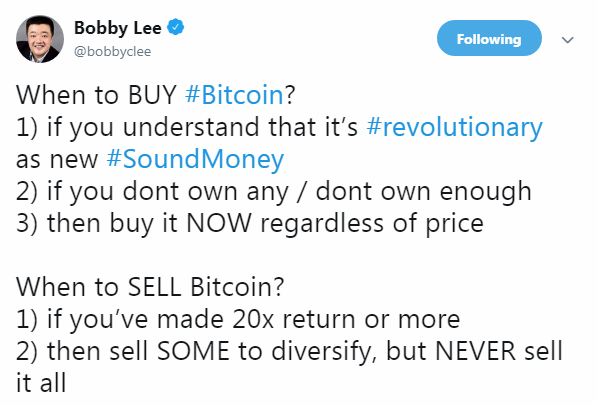 The second reason for buying Bitcoin according to Lee’s tweet was if one didn’t own enough Bitcoin or didn’t own any Bitcoins. The third point insinuates that if the above-mentioned points hold true then one should buy Bitcoin no matter what the price of Bitcoin is right now.

His second part of the tweet pertains to selling Bitcoin. The first reason that Lee explained to sell Bitcoin is after getting a 20x gain. Furthermore, Lee asks not to sell it completely, but rather diversify the investment which is his second point.

Just before tweeting the reasons/timings to buy Bitcoin, Lee sent out a tweet that said that Initial Coin Offerings [ICO]s or Security Token Offerings [STO]s are ultimately all centralized and that the real revolution and the sound money was Bitcoin. 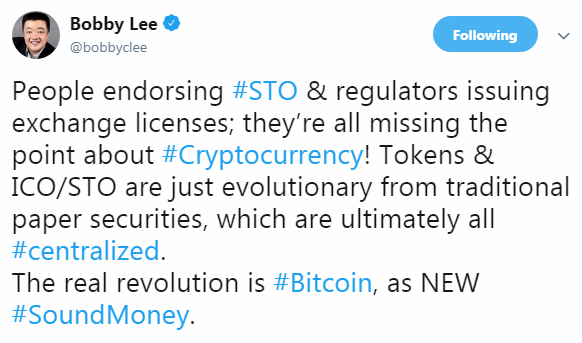 To Lee’s “when to buy Bitcoin?” tweet a user Rafal replied:

“The most important & under appreciated (& valued) companies working on the 2nd layer of #bitcoin are:@Blockstream, @lightning, @RSKsmart, @commerceblock, They are all building “the roads” on top of a predictable rock (bitcoin) not sand (eos tron neo eth etc)”