On 3rd December, the official subreddit of the Bitcoin community, r/Bitcoin, reached a million subscribers, demanding attention as it passed a major milestone. This is indicative of massive adoption that is now becoming exponentially visible with the expansion of the cryptocurrency space and the community. 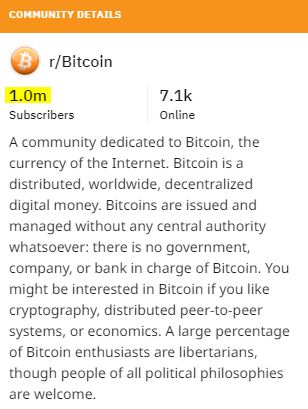 Despite the success, a lot of accusations have been drawn at the subreddit forum by multiple personalities. The most significant remarks regarding the matter were made by the Bitcoin Cash [BCH] proponent aka Bitcoin [BTC] Jesus, Roger Ver.

Amidst the battle that had taken place within the Bitcoin Cash [BCH] community and the hard fork fiasco, Ver was in trial by combat with the moderators of r/Bitcoin. Here, the biggest complaint heard from him was that the moderators of the Bitcoin subreddit were imposing censorship in the community, moving towards a centralized control of speech.

About three months ago, to prove his point of r/Bitcoin’s increasing censorship, Ver ambushed two Blockstream members and Bitcoin supporters during a conference for an impromptu interview session. The interview soon turned salty when Ruben Somsen, the co-moderator of the subreddit platform requested Ver to verify the final interview before broadcasting it online. Despite the request, the owner of Bitcoin.com went ahead with the release, creating further friction between r/BTC [Bitcoin Cash official subreddit] and r/Bitcoin communities.

Contrary to what Roger Ver believes, Riccardo Spagni, a core member of the Monero [XMR] community recently commented that ‘there is too much brain power, research, adoption and money that has been poured into Bitcoin for it to fail’. He also stated that the chances of the Bitcoin ecosystem failing are much smaller than those of other altcoins in the cryptocurrency space.

webdev2018, a Reddit user and a blockchain space enthusiast stated:

“For the fork, against the fork, who cares! One million episodes subscribers!”

CryptoBull007, another user and a cryptocurrency follower also claimed:

“I was the million! Congrats to everyone in the bitcoin community!”