The herd mentality is in full force on Wall Street, but two groups are stampeding in different directions. Equity investors have spent the last couple of months dumping stocks across sectors; meanwhile, public pension plans have been pouring money into credit as the cloud of unfunded liabilities lingers.

In fact, one analyst reports that pension allocations to credit hit a new record last month. 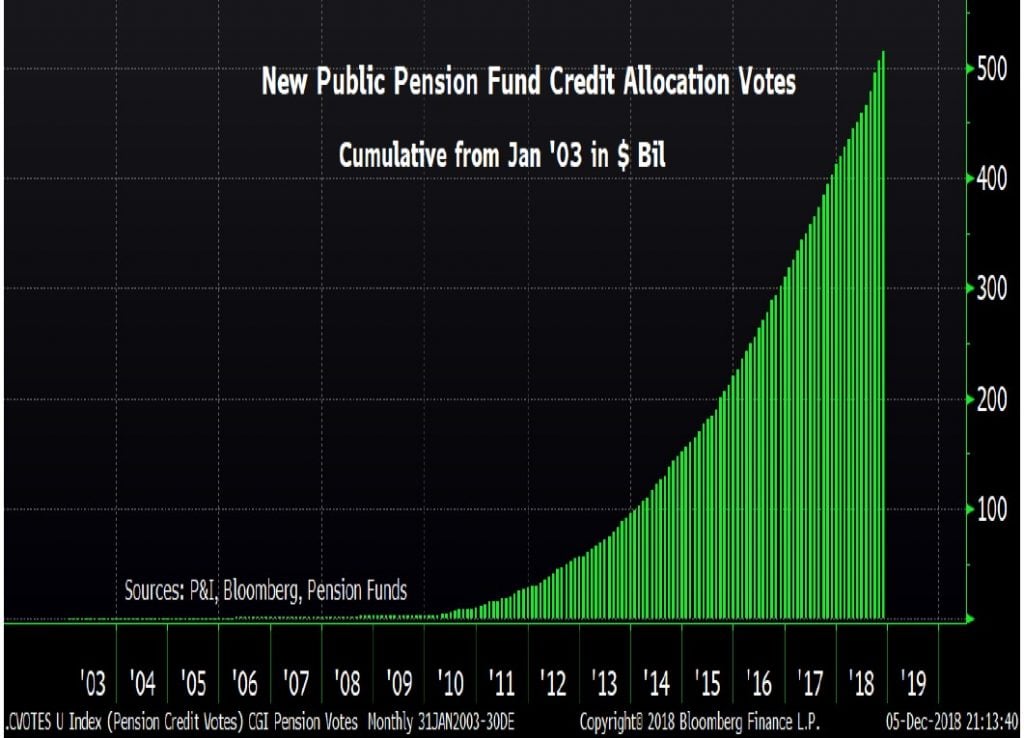 Even though stocks are selling off right now, the heavy pension-lend credit buying should eventually lead to a rally in equities.

Canaccord Genuity analyst Brian Reynolds pointed out the pension trends in a note today. He predicts that the latest stock correction will last three to four months, noting that this week’s bounce proved to be only fleeting. He said investors saw the uptick in stock prices as a chance to exit, so that’s exactly what most of them did, triggering another round of selling. The S&P 500, Dow Jones Industrial Average and NASDAQ Composite were each down by about 1%.

One of the biggest issues for stock prices was the inversion of the two- to five-year section of the Treasury curve earlier this week. The inversion sparked some initial equity selling, which then intensified as investors heard more and more about the inversion, causing them to become even more worried in an endless cycle which continued to pound stocks.

Here’s where public pensions are putting their money

“The credit funds the pensions hire are not likely going to put all of this to work until they feel that the equity selling has subsided, but it will eventually support more financial engineering designed to boost share prices,” Reynolds explained.

Reynolds of Canaccord Genuity isn’t the only one who noticed that public pensions are increasingly turning to credit funds lately. Goldman Sachs analysts highlighted a slightly different trend in pension investments toward the end of November. They found that public pensions in the U.S. were boosting their allocations specifically to debt in emerging markets. They found that pensions were looking to overseas stock markets for returns as well.

According to Goldman’s analysis of investments by the 50 biggest public pensions in the U.S., approximately half of them allocated toward emerging market debt. About 16 of them sought exposure via other fixed-income mandates, the firm added. According to Goldman, many pensions have been slashing their forecast for returns recently, which has sent them looking for new areas to invest in.

Unfortunately, the quest for new investment areas may be too little, too late. Pension funds across the U.S. have been dealing with unfunded liabilities for years, and this problem is expected to only get worse as the years go on. Recent estimates peg unfunded liabilities by state pensions at as much as $4 trillion. Plans have done little but kick the proverbial can down the road when it comes to trying to make their pensions sustainable.