The cryptocurrency market has recently regained its volatility above a fair level, with XRP showing the most fluctuation presently. At the time of writing, the coin was up by 1.63%, trading at $0.457, with a market cap of $18.4 billion. The 24-hour volume was recorded at $363.6 million.

In this timeframe, XRP broke its previous resistance level fixed at $0.464 and attained a new point of resistance at $0.465. Furthermore, the support line is steeply adjoining the points from $0.438 to $0.461 and is reaching the concentration point with the resistance. This might give way to a trend breakout soon.

The Parabolic SAR is currently bullish on the XRP market. The dots are aligned below the candlesticks to show support for a positive price trend.

The Chaikin Money Flow is traveling above the 0-mark and is bullish zone at the moment. However, the head of the indicator is pointing downwards, looking to side with a bearish prediction.

The Klinger Oscillator has made a bearish crossover and is not predictive of a positive future for the XRP market. 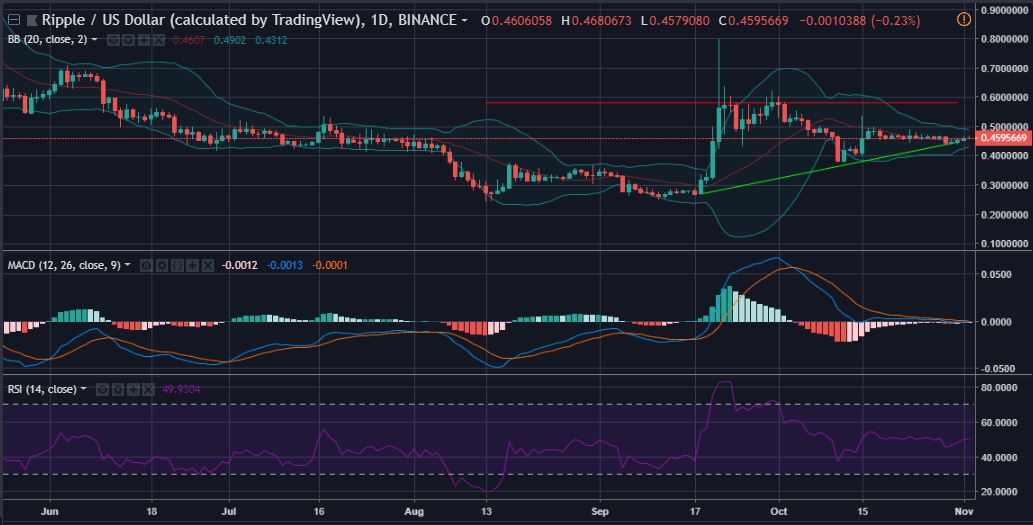 In the one-day scenario, the resistance level is set at $0.582, whereas the support line is ranging from $0.27 to $0.447. At present, the uptrend is forming an ascending triangle with the resistance point, showing an upward price trend.

The Bollinger Bands are compressing the price volatility to a minimum, currently going for a narrower pattern. Therefore, the indicator is suggestive of low price movement in the XRP market.

The MACD made a bearish crossover a while ago in the timeline. It is currently traveling below the signal line. However, the indicator has denied any prediction for the price trend and is moving in a straight path.

The RSI has given a nod to the above indicator as both are syncing on the neutral prediction for the cryptocurrency.

The post XRP/USD Technical Analysis: Tie between bull and the bear to continue? appeared first on AMBCrypto.