The investors have grown bored of the sideways game being played by the cryptocurrency market in recent weeks. By the time the members of the crypto-space began celebrating the return of volatility in the market last week, almost all the big coins had returned to their horizontal movement. 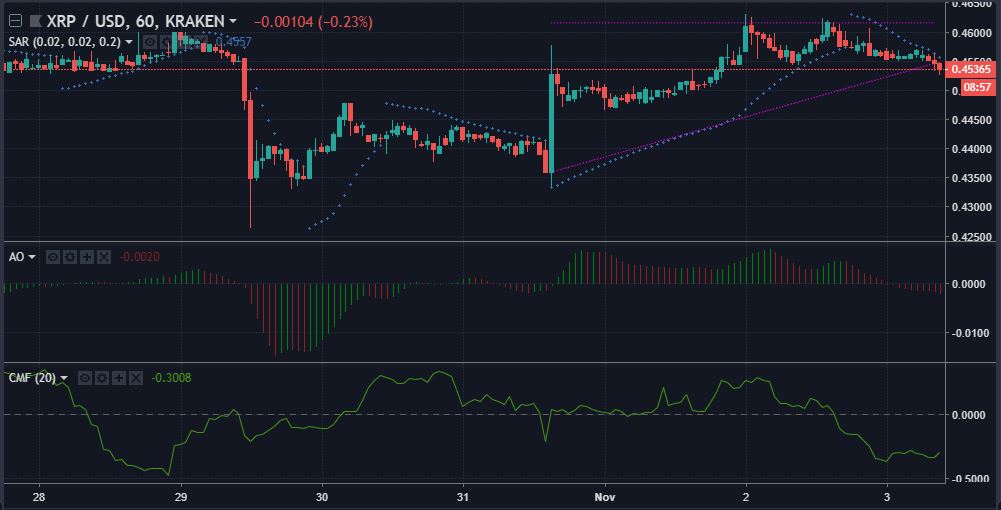 In this scenario, the uptrend is ranging from $0.436 to $0.454 and forming an ascending triangle with the resistance level set at $0.461. The point of intersection between the support and the resistance is still considerably far, hence, a trend breakout is not forecast in the foreseeable future.

The Parabolic SAR is bearish on the coin and is flashing a warning sign for the price trend. The dots are presently aligned above the candlesticks to limit the XRP hike.

The Awesome Oscillator is also glowing red, indicative of a bearish market for XRP.

The Chaikin Money Flow is extremely bearish on the token as well. Currently, the indicator is swimming much below the 0-mark, suggestive of a bearish run. 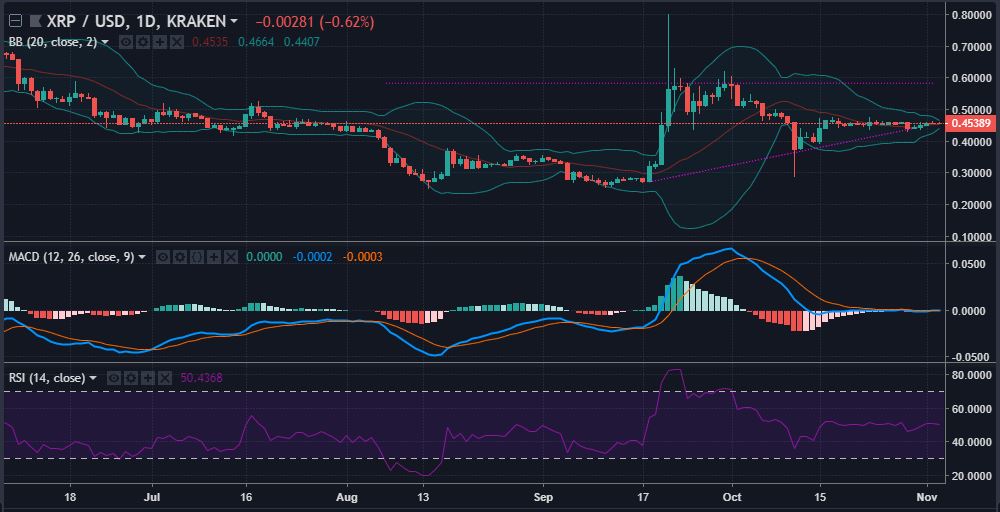 In the one-hour timeframe of XRP candlesticks, the uptrend is stretching from $0.272 to $0.439 while forming an ascending triangle with resistance set at $0.581 as well. An intersection cannot be extrapolated from this graph as of now.

The Bollinger Bands have concentrated the price movement of the cryptocurrency. The XRP market is extremely low on volatility at the moment and might react through a trend breakout soon.

The MACD is also nodding at the above indicator, traveling neutral into the predictive space. The reading line made a bearish crossover by the signal and is now moving in a straight line to reflect a sideways movement for XRP.

The RSI is also moving fairly straight, currently neutral on the XRP market. This could mean that the indicator is predicting a horizontal movement as above.

The majority of indicators in the technical analysis are flashing a warning sign, but are predictive of a sideways trend for the XRP market.

The post XRP/USD Technical Analysis: Market to play dead on sight of the bear appeared first on AMBCrypto.