Intercontinental Exchange’s Bitcoin futures trading platform, Bakkt expressed interest in adding cryptocurrencies other than Bitcoin, in a Q&A on Twitter on Friday.

Since Bakkt was questioned repeatedly by the community about the addition of other cryptocurrencies to its platform, Bakkt replied:

“We’ll consider additional contracts as the landscape evolves and as we receive additional customer feedback about what they want and need.”

The comments for this post on Twitter were flooded mostly by supporters of XRP. A well-known Twitter user among the XRP and Ripple community, Dr. T, tweeted a poll and hinting the listing of XRP, to which more than 6300 people voted in agreement. 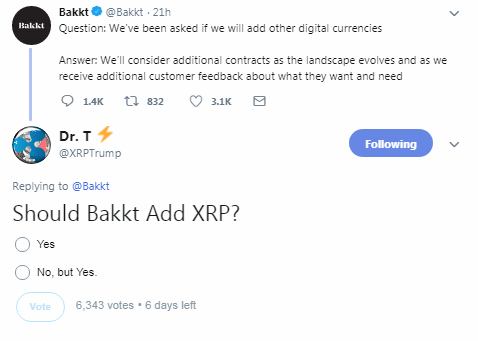 “$XRP please it’s the future of money. The standard, the revolution, a way of life. Thanks kinds Sirs.”

Justin Sun, the founder and CEO of Tron Foundation retweeted Bakkt’s post, saying that TRX would be the best choice if Bakkt ever decides to add more currencies to its platform.

On Thursday, Misha Lederman, a Tron enthusiast, tweeted a copy of the letter sent from the Tron community to Bakkt in response to their tweet. The letter makes the case for Tron to be considered in listing the next asset on Bakkt.

Although Bakkt’s tweet about adding assets other than Bitcoin has spurred the crypto-community, it is not expected to happen anytime soon as Bakkt recently postponed the launch date of Bitcoin Futures trading from December 12 to January 24, 2019.

Bakkt’s CEO Kelly Loeffler explained that the delay is caused due to the rigorous testing and re-testing. She said:

“With product launches, there are new processes, risks and mitigants to test and re-test, and in the case of crypto, a new asset class to which these resources are being applied. So, it makes sense to adjust our timeline as we work with the industry toward launch.”

The post XRP and Tron [TRX] voted most popular to be added on Bakkt appeared first on AMBCrypto.