Tether Limited, the company behind the stablecoin USDT, has announced recently its newly established relationship with a financial institution, Deltec Bank and Trust Limited in the Bahamas. The move reportedly came after the bank’s “due diligence” on Tether Limited.

This effectively means that the bank has gone through a vast number of background checks on Tether to establish its assets and liabilities before partnering with it.

Rumors and speculation have been circling Tether for a long time, especially since Wells Fargo, decided to not have Tether and Bitfinex as its customers. Tether Limited and Bitfinex were banking with Puerto Rico’s Noble Bank until the bank decided otherwise.

“The acceptance of Tether Limited as a client is after a review of our company. This included, notably, an analysis of our compliance processes, policies, and procedures; a full background check of the shareholders, ultimate beneficiaries and officers of our company; and assessments of our ability to maintain the USD-peg at any moment and our treasury management policies.”

Tether also confirmed that this due diligence happened over a period of several months and that the bank would review Tether on an on-going basis.

The Deltec Bank has also issued a letter confirming portfolio cash value of Tether’s account valued at $1.83 billion. The bank clearly mentions that the letter is provided without any ‘liability’ and that it ‘is solely based on the information currently in our possession,’ which sounds vague. 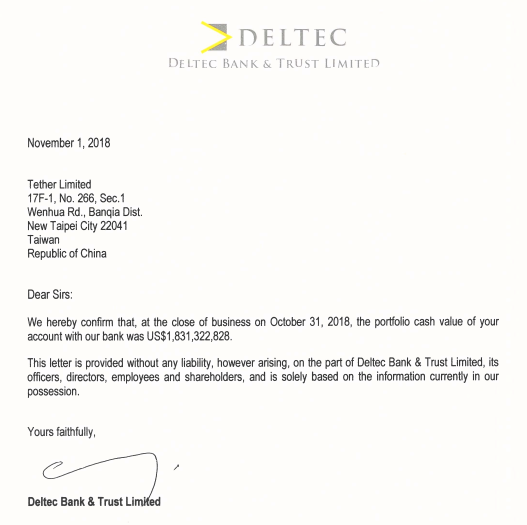 However, the last attestation was done in June 2018 by law firm Freeh, Sporkin & Sullivan LLP, which confirmed that ‘Tether’s unencumbered assets exceed the balance of fully-backed USD Tethers in circulation’.