American Express has recently announced that they will be commencing their entry into the Chinese market, which has been predicted as being the biggest card payments market by late next year. This move was made as a joint venture with LianLian Group and is the first venture to not process payments through the state-controlled UnionPay network.

The approval reportedly allows the company to process and settle payments in CNY domestically by setting up their own network in conjunction with their partner. The venture is named Express [Hangzhou] Technology Services Co., and is required by the Chinese government to complete preparations for operations within a year.

Notably, both American Express and LianLian Group have been in a partnership with Ripple, and are confirmed to be members of RippleNet. AmEx joined RippleNet with a vision to aid Small and Medium Enterprises with moving money late last year. LianLianPay on the other hand, joined the network in February this year and has over 150 million registered customers. 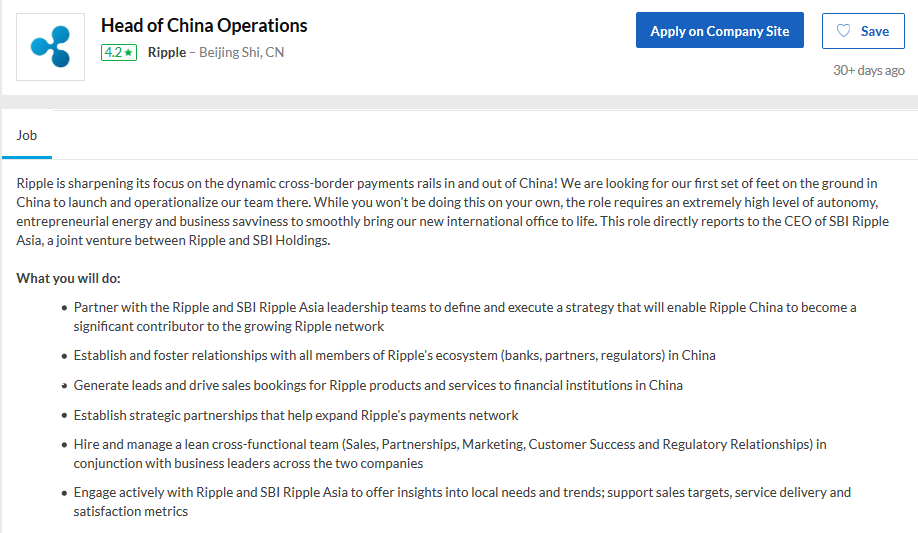 While this not only marks the entry of Ripple into one of their highest priority markets for cross-border payments, it is also important to note that the company is planning to move into the Chinese market, as seen by postings on their official job portal. The job postings have since been removed, but are still present on job portal Glassdoor.

China has a strict policy against cryptocurrencies, thus ruling out the adoption of XRP-powered xRapid in the country anytime soon. However, the government seems all for the use of blockchain and DLT, which is what Ripple utilizes in its xCurrent and xVia products. However, the kicker for XRP HODLers is contained within the implications of this joint venture, which provides the much-needed fiat liquidity in the Chinese market.

Moreover, as pointed out by crypto-influencer Dr. T on Twitter, both members also have needs for independent cross-border payments, potentially opening up possibilities of a more full-fledged usage of RippleNet’s capabilities. What exactly the network can achieve can be seen by the feature included known as multi-hop. As explained by Craig DeWitt, the Director of Product at Ripple:

“Multi-hop gives Ripple members the ability to transact with banks or payment providers or digital wallets that they don’t have a direct relationship with. That’s important because in today’s world you need a bunch of bilateral relationships clunkily put together in a chain in order to move money. Multi-hop makes that thing of the past.”

Asheesh Birla, the Senior VP of Product at Ripple, also explained how more clients signed on to xCurrent increases the reach of the network as a whole. He stated:

“xVia allows you to use a one standard connection to get you all the benfits of RippleNet and our products. Without xRapid they would use xCurrent and where xRapid is available, they can then add on xRapid and move money on demand using XRP and payout instantly. They get reach wherever xCurrent is available, whether that be a bank [or] a cash payout provider.”

This generally translates as being bullish for the blockchain and DLT space in general, as the move into one of the most-vaunted markets for Ripple has come to a realization.

The post Ripple moves into China with AmEx and LianLian Group entry: Providing reach to XRP-powered xRapid through multi-hop appeared first on AMBCrypto.