As a species, humanity has long had a natural connection with technology. It’s among our most powerful tools for progression, and has done a lot to help cur common human ailments. From making our lives longer by making it easier to stay healthy through to being able to connect with one another from across the world, modern  technology plays a critical role in helping us reach where we are today. 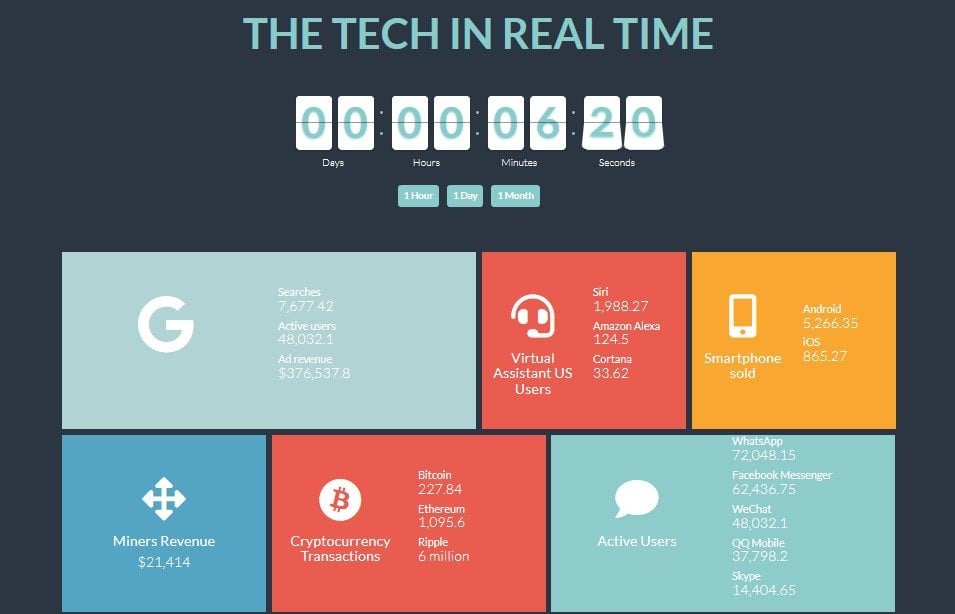 Technology is so significant, though, that it can be easy to forget just how big a role it plays in our day-to-day lives. Just how important, then, are various forms of technology to how we live in the modern world?

This new infographic from Casipy.com shows us just how the world has changed around us. In a few short decades, we have made centuries of progress. How, though, does this impact on our day-to-day lives? What kinds of transformative changes have come to be purely thanks to the uplift in modern technology?

Are we really so connected to modern technology? The numbers shown below will give you a good idea of our technological dependency.

Go back just two decades, and if you wanted to start learning about a subject you would need to go to a library or take a college course. You would need to spend all day just sourcing information, and then hoping that said information was still relevant to the project that you are working on.

The internet, though, has changed all of that. Today, we can see as many as 5 million unique searches across Google alone. This shows you how in a single day, the people who once used to go to the library for information can now turn to the internet.

While we might still value education as a form of progression, self-education from home has become much more possible. Today, we are all sitting in front of, or holding, the biggest information library every built: something that dwarves all of the great libraries of human history combined.

Technology has transformed how we learn and do just about anything in our lives. Add in the fact that we see over 1 million questions asked to the likes of Siri, Amazon Alexa and Cortana in a single day, and it’s easy to see why technology now plays such a leading role in our lives.

We have made it so easy to learn, creating a revolution in the way in which we progress as a species. While one issue with the internet is the scale and availability of information can make it hard to know what the truth is, the fact that we can learn so easily today via millions of unique Google searches shows us the immense power that we currently hold in our palms.

A New Form of Communication

While this might seem obvious to some, the way in which we talk and communicate with one another has changed forever. Take the fact that, in a single day, we see an incredible 4.6m smartphones of just Android/iOS sold. Every day, millions of new handsets are joining that list and making sure that people get to experience the power of being able to talk with people from all across the world.

Go back even to the start of the 21st century, and communication across continents online was still in its infancy. Today, we carry around smartphones in our pockets which far out-power the tools we once used to communicate online with one another.

This goes to show just how connected the world is today. In the past, were stuck to know only local people and people who we could physically talk to face-to-face. This exciting new transformation has changed all of that to ensure we can talk to anyone, anytime we want.

Modern technology in the world of Shopping

In the past, if you wanted to head out to buy something, it meant you had to spend a lot of time and money. You’d need to invest in travel to get into town to buy whatever product that you chose. You would need to walk around bustling towns and cities to try and find the product that you had your eye on. Put simply, it would become a drag. You would get annoyed, spending hours in a city that is loaded with people and was very much short in competition.

It meant paying the price that was in front of you, or going without. Now, thanks to the world of eCommerce, this has changed forever. In a single day, the retail eCommerce sector produces a dizzying $6bn in sales. That’s in a single day, and shows you just how immense and significant the change to how we spend our money has come.

Once stuck with the one and only local option, today we see billions spent through the internet instead of on the high streets. Part of this contributes to how major companies such as eBay and Amazon pull in over $500m between them every single day.

This is not just limited to the PC, either: the mobile commerce sector is worth around $4bn per day. People are no longer quite so enamored by a trip around the stores and the chance to spend all of their day battling through crowds. Today, people want value and they want convenience. The massive competition online, matched to its convenience, ensures that people come back to the world of shopping on a regular basis to experience something much easier than traditional shopping has ever been.

So, how attached are we to modern technology? It’s transformed how we learn, how we communicate and how we spend our money. We’d say that’s pretty significant, wouldn’t you?

The post Modern Technology: How Big An Impact On Our Daily Lives? appeared first on ValueWalk.