In a discussion at the Consensus Invest 2018, Arianna Simpson, a venture capitalist, and Lucas Nuzzi, a crypto researcher, spoke about the bear market and about Litecoin and how Charlie Lee, its founder, sold all of his Litecoin at the peak.

In response to Litecoin’s end of the year prediction, Lucas Nuzzi, Director of Research at DAR Crypto, said that he doesn’t believe in Charlie Lee’s investment in Lightning Labs and putting out the narrative of Litecoin being an on-ramp to Lightning Network.

Arianna Simpson, a venture capitalist at Autonomous Partner, added to Nuzzi’s point and said that Litecoin doesn’t have a reason to exist. She continued:

“It [Litecoin] has literally no reason to exist; it’s like a multibillion-dollar test. I’m sorry, it’s a very very expensive test net and I think the narrative of its silver to bitcoins gold is bullshit, there’s no need for that.”

Simpsons continued saying that she doesn’t have any investments in Litecoin. Furthermore, she said:

“And Charlie Lee dumped his entire stake at the peak of the market to avoid a conflict of interest like I’m sorry if you look by the way at their at their balance of Treasury, which is public. I mean, they have like a joke, so I’m not particularly bullish on the prospects of it.”

While Litecoin enthusiasts might be aggressively pushing adoption, the price of Litecoin has promptly followed that of Bitcoin and decreased by a total of 92% since its all-time high in January 2018.

There is also a FUD circulating on Twitter saying that Charlie Lee predicted the fall. 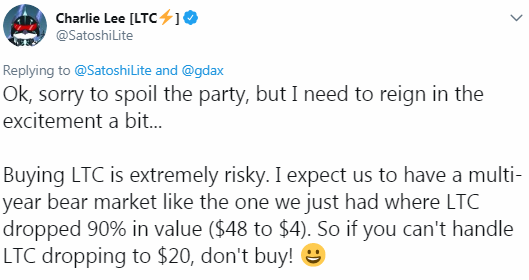 “Every pump I’ve seen has been followed by a bear cycle. The market needs time to consolidate. That’s just my experience from 6+ years of watching this space. How low and how long it will be is unclear. But people need to be aware of this possibility.”