America’s biggest ever lottery jackpot was won recently by a lucky ticket holder living in South Carolina. The jackpot totalled a staggering $1.6 billion, and the chances of winning were around 1 in 302.5 million. To stress just how lucky that is, the chances of being hit by lightning TWICE in your lifetime comes to a measly (by comparison) 1 in 9 million.

Lottoland, inspired by this, asked over 1,000 people from the UK the following question:

You have just won £10 million. How would you share this out between the most likely donees – family, friends and charity? Any money that you do not share, you keep.

There’s a ton of research online that dabbles with jackpot spending: the sorts of things you might invest in should you suddenly find yourself brimming to the teeth with cash.

A quick search online reveals some of the most unusual things people have spent their winnings on, which include purchasing a water park, creating their own TV show, going on an endless shopping spree, or even buying an acre of the moon (?!).

When overwhelmed with all this possibility it’s easy to assume that you’ll be hording every dime of that £10 million to yourself ($13 million in USD). But if you truly landed such a staggering amount of cash, you’d soon be faced with a few choices – how much, if any, will you be sharing with family members? Will any of your friends be gifted any? And will you be donating any of your winnings to charity?

We thought it would be intriguing to see whether any patterns emerged in the demographic data. Because, lotteries aside, the patterns we see might shed light on the way different groups of people handle their real-world finances.

And we weren’t disappointed. 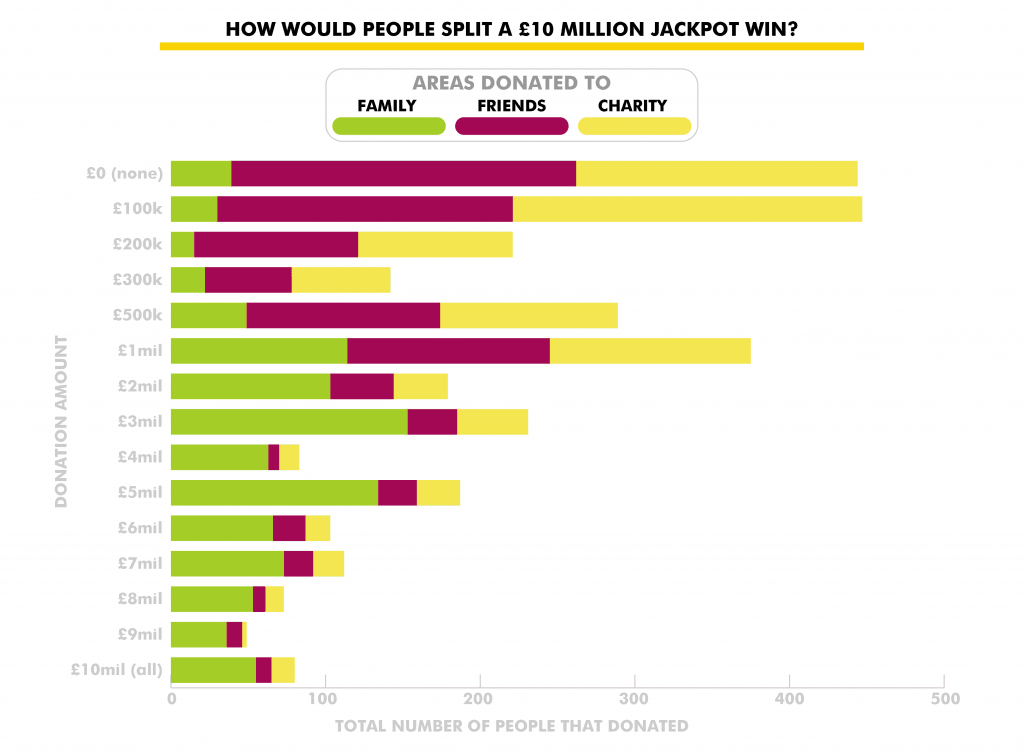 The lowdown above shows how, as cuts grow larger, the preferences for sharing waver.

The majority of respondents chose to give their family a generous £3million, or 30% of their overall jackpot. The sweet spot for family generally lay between £1million and £5million.

If you thought friends would be topping the gift list along with family, you’d be dead wrong. The most popular cut for friends was a brutal £0 (nothing) – while charity was most often merited a share of £100k (1% of the overall jackpot).

Digging further into the data uncovered a wealth of other interesting titbits (pun intended): 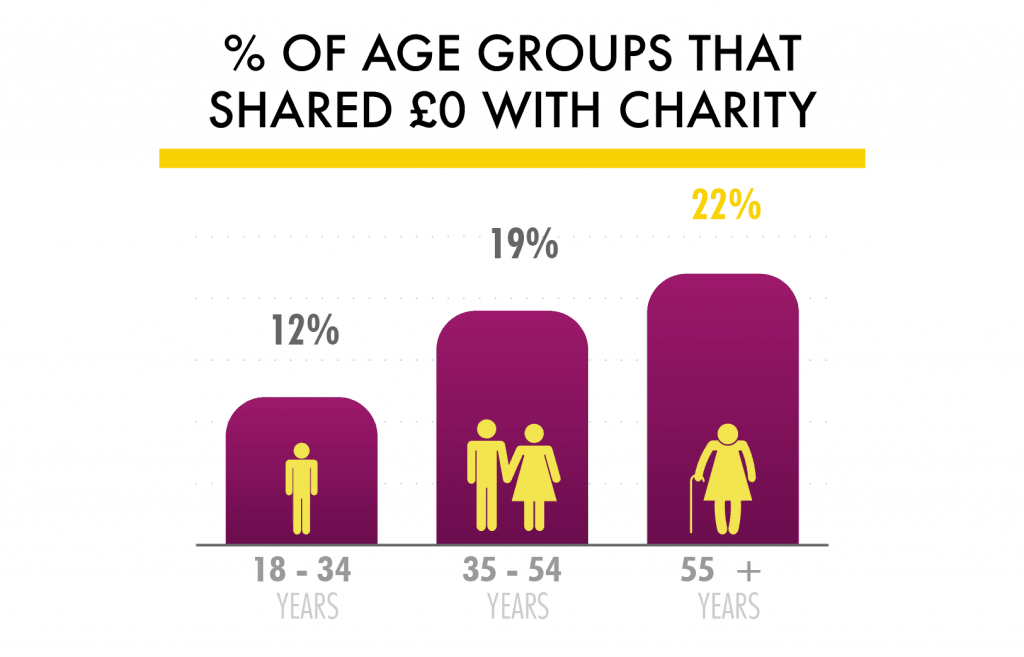 It appeared that as respondents grew older, the less inclined they were to contribute to charity.

Does this mean that the above 55s are less charitable than younger generations? Or are they simply conserving cash to be used elsewhere? 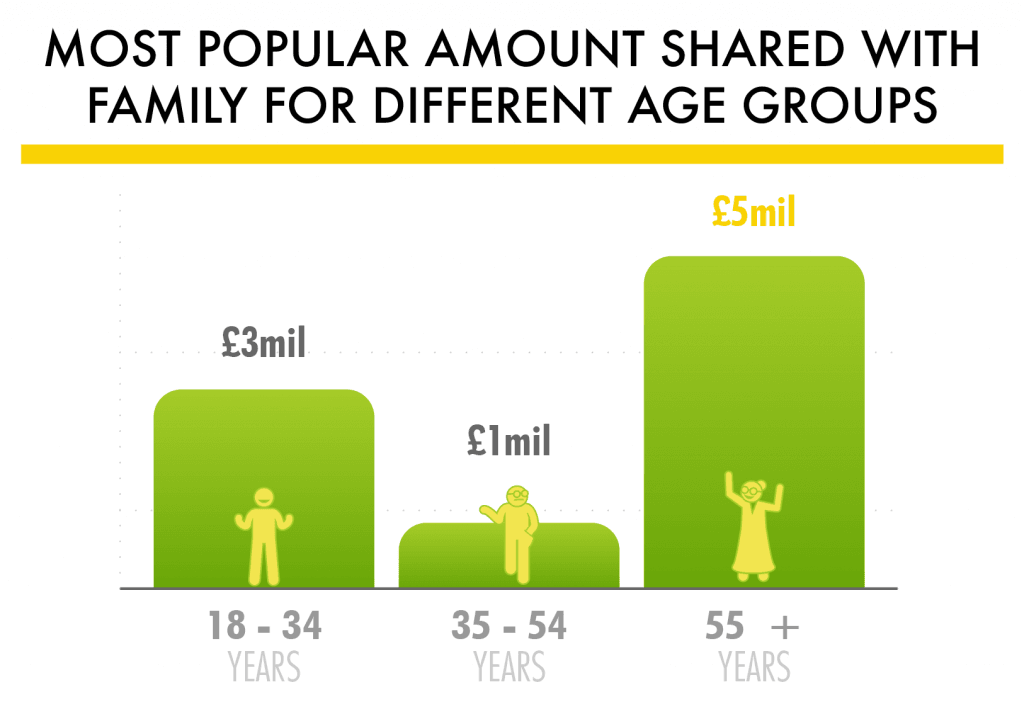 The over 55s were found to share an average of £5million with family members, beating the average for young adults (£3million) and the 35 to 54’s average of £1million. 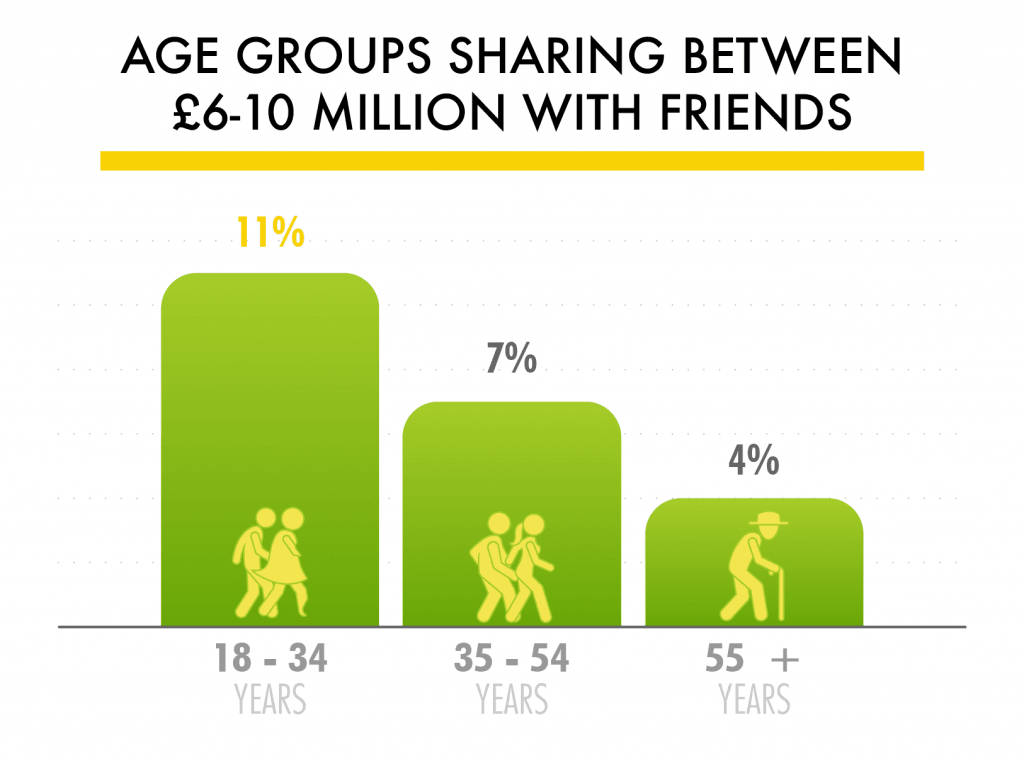 Despite the most popular option for friends being 0%, we did notice that young adults favoured gifting larger cuts over older respondents. Are these large contributions hasty on their part? Perhaps this reflects on the way younger adults manage their cash?

We also asked people whether they would prefer to go public with their winnings or remain anonymous, and the results were largely expected: 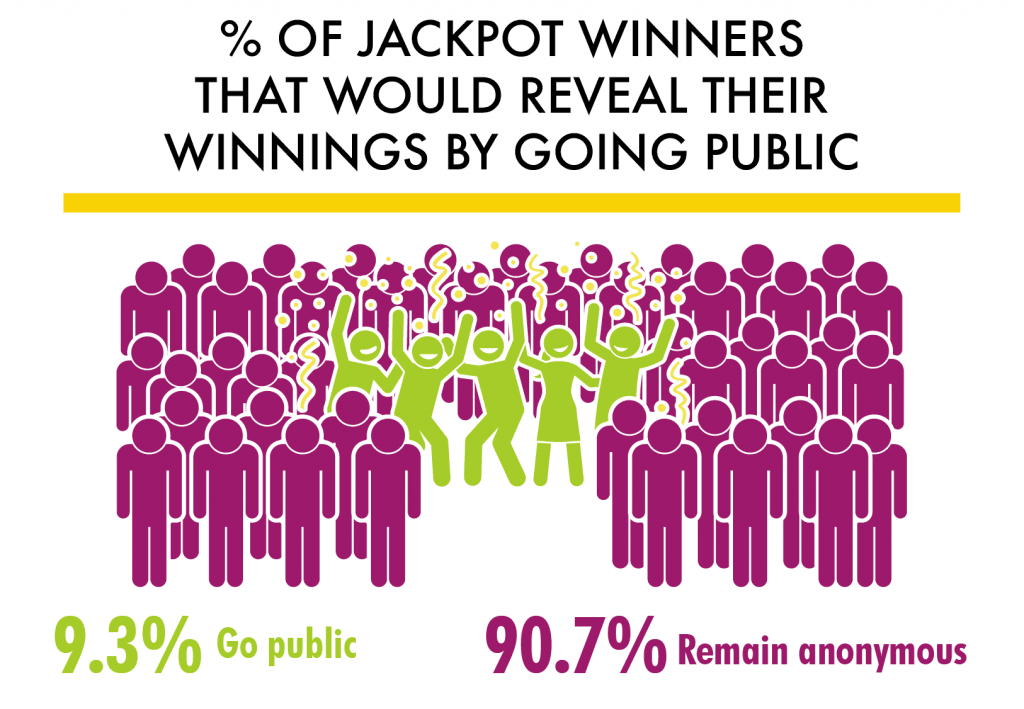 However, what we didn’t expect to see were the following results:

Surprisingly, as family size increases, the tendency to go public with winnings increases. 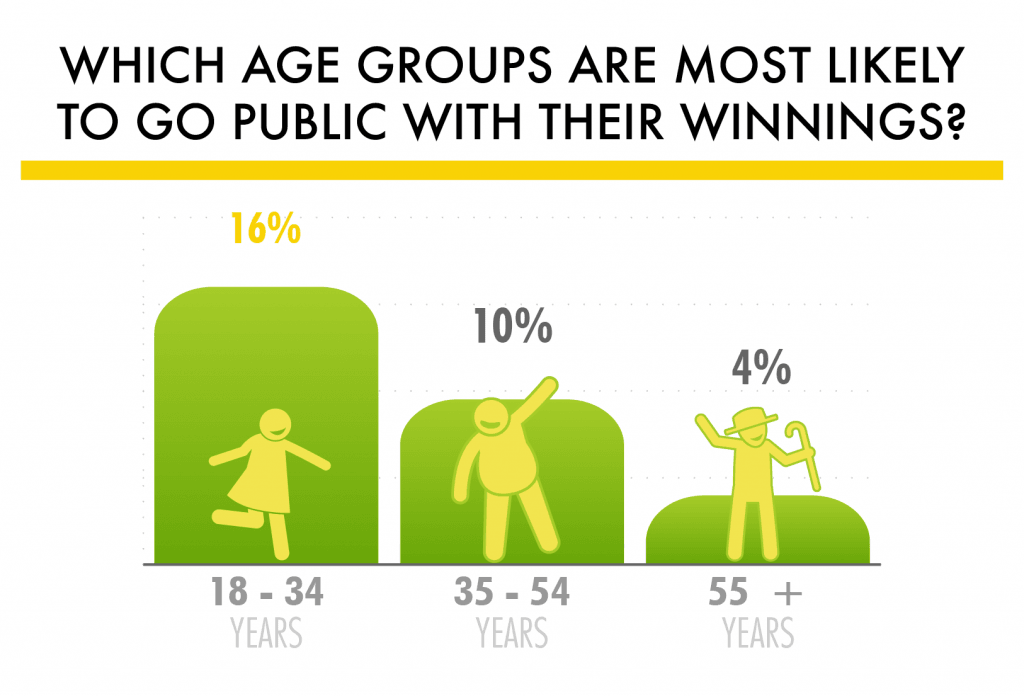 Young adults, interestingly, were more likely to go public with their winnings than older generations.

So, what conclusions can we draw from this survey … ? Are the elderly more careful with their cash, or are their priorities just aligned more with family? Are friends the last people on the cards when it comes to (financial) gift giving? And when gifted a huge amount of cash, do people from larger families care less about keeping it a secret?

Whatever the case may be, let’s hope you’ll have to make the choice between family, friends and charity yourself one day!

The post How Would You Manage A Staggering Amount Of Cash? appeared first on ValueWalk.