Opinion: All eyes have turned to the upcoming Bitcoin Cash [BCH] hard fork, with the battle between Coingeek and Bitmain continuing to escalate. At last count, Bitcoin SV, the implementation being pushed by Craig Wright and Calvin Ayre, remains as the leader in terms of hashrate on the BCH chain, while Bitmain-powered Bitcoin ABC suspiciously lags behind.

Bitcoin SV has recently gained support from 66% of miners on the BCH network, with ABC only being supported by 32% of the hashrate. This seems uncharacteristic for a company that produces the very tools required to mine cryptocurrency and controls 80% of the miner market, leading many to believe that underhanded practices are set to come into play.

To understand how Bitmain could potentially win the hash war through redistribution of existing resources, we must first look at the statistics for the blocks being mined on the BCH chain. As SV has a dedicated pool known as SVPool, along with the backing of Coingeek-sponsored hashpower, it has carved out its place as being the chain with the most work done on it.

Supporters of Craig ‘Faketoshi’ Wright quote this as being the criteria for the majority chain, while others state that it is nothing but a glorified 51% attack on the chain. However, most exchanges thus far have stated that they will be extending support for Bitcoin ABC as continuing the BCH ticker symbol. Pre-fork trading has also been initiated on exchanges such as Poloniex and HitBTC, where the value of the ABC coin is more than that of the SV coin, representing public sentiment regarding the fork.

Coingeek is pushing the SV implementation, likening it to the idea that “cryptocurrency needs to be seen as currency”, painting Bitcoin ABC as “driven to completely alter the work” that has been done so far. They also claim that the reactivation of the OP_CHECKDATASIG opcode on the chain will lead to the criminalization of the BCH blockchain. Coingeek claims that this would introduce anonymity to the BCH chain, which they claim is not what digital currencies should include. 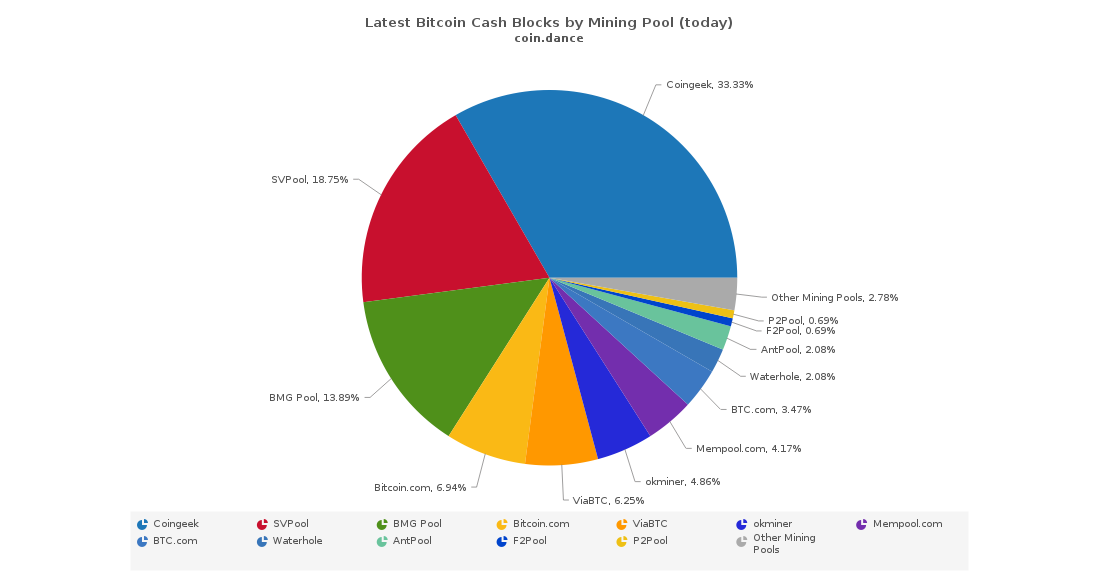 The politics aside, Bitmain’s position seems precarious at this point, considering that they hold a lot of their assets in Bitcoin Cash. This is due to their active participation in the development of the coin, which presents a potential conflict of interest. It is also due to the fact that they very actively participate in the mining process for Bitcoin [BTC] and Bitcoin Cash [BCH], even to the point of causing centralization due to the concentration of mining hashpower.

This is presented in its ownership of three of the biggest mining pools in Bitcoin, namely AntPool, BTC.com, and ViaBTC. These three factors find about 40% of the new blocks on the Bitcoin network currently, representing a serious issue of centralization. These issues aside, the hashrate of the Bitcoin blockchain comes up to around 52 Exahash/s, 40% of which is approximately 20.8 Exahash/s. The hashrate of the Bitcoin Cash blockchain is at 5 Exahash/s, with 3.3 Exahash controlled by Coingeek.

This presents an interesting situation, wherein Bitmain could switch over the hashrate from Bitcoin to Bitcoin Cash, as both of the coins utilize the same SHA256 hashing algorithm. This would come at a 25% loss, as it is that much less profitable to mine BCH due to its low price and transaction fees, along with potential issues with distributed hardware across the pool. 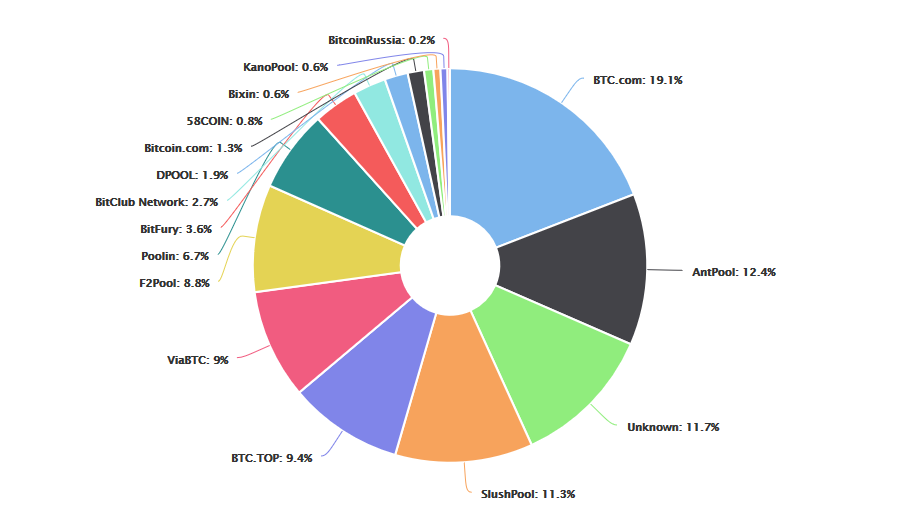 Bitcoin hashrate distribution | Source: BlockchainTo make matters more complicated, Bitmain has claimed that they only control around 2.3 Exahash/s on the BTC chain, presenting their position as a smaller player in the market. There have also been multiple allegations against Jihan Wu, the CEO of Bitmain, which state that the company secretly mines coins with their new products until they are ready for mass production, giving them an edge against their competition.

Whether Bitmain would switch over their mining power or not is yet to be seen, but it is very clear that they could if they so wished. This would also work in their favor, as they hold upwards of 1 million BCH, and would profit greatly if they could control the chain.

This provides a recipe for disaster, and the cauldron seems to brew as the hard fork looms on the horizon. Whether this a protracted hash war or just another chain split is yet to be seen. However, without the implementation of replay protection, it is almost positive that this coin might as well tarnish the BCH name.

The post How Bitmain can win the Bitcoin Cash [BCH] hash war: Bitcoin [BTC] hashrate to play a role? appeared first on AMBCrypto.