Joseph Lubin, the co-founder of Ethereum and the founder of ConsenSys, a blockchain software development company, tweeted the release of Rimble Design System [RDS]. RDS, as the founder claims, is a package of adaptable components and tools to help make the development of decentralized apps [dApps] on Ethereum more user-friendly.

The launch was tweeted by the founder, Joseph Lubin: 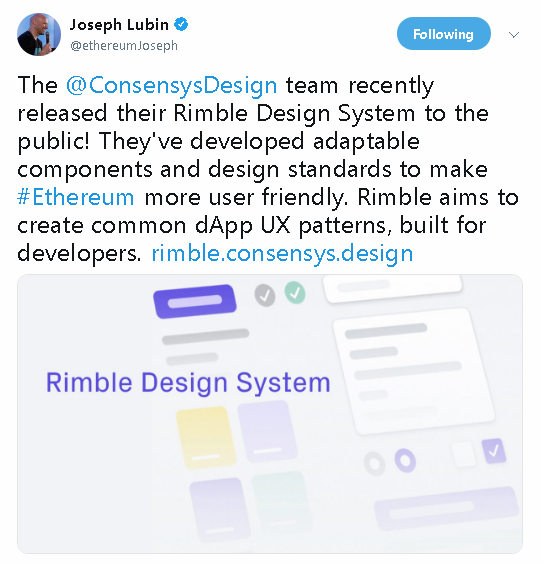 The design team at ConsenSys agrees that the development of dApps requires users/developers to learn new patterns, which are a hurdle for both designers and front-end developers.

Amanda Gutterman, the Cheif Marketing Officer at ConsenSys, tweeted recently that the ConsenSys Grant Program will be awarding $500,000 to projects in the Ethereum space which focus on infrastructure, research, interoperability, usability, and developer tools. This was announced at Devcon 4 by Joseph Lubin.

ConsenSys aims to create a new internet because “the current internet is broken”. In a Medium post, it described how digital information on the internet can be stolen without the creators getting the required credits. It plans to eradicate this model of the internet and create a new one. It stated:

“It’s time to change this model; to reward those who enrich our digital worlds. It’s time to use ethical collaboration to foster innovation and growth, with infrastructure built to support just that. It’s time to decentralize the Internet, to move to version three.”

In its effort to help decentralize the world and help companies, ConsenSys oversees the project of a startup called Kaleido. The startup aims to help enterprises implement blockchain technology and is collaborating with Amazon Web Services to do just that.