After last week’s bloodbath, the market saw a surprising player running in the top-10 on Tuesday, November 27. Bitcoin Cash SV [Staoshi’s Vision] made its way in the CoinMarketCap’s list and was at the seventh position at the time of press, after rising over 80 percent in a seven-day time frame.

BSV is now one of the largest virtual currencies, with a market cap of $2 billion, whereas Tether [USDT] and Litecoin [LTC] moved to positions eighth and ninth respectively, at the time of press.

This upward momentum of the token started when Dr. Craig Wright, the Chief Scientist at nChain, aka Faketoshi, in a tweet, said:

“On Friday, at Coingeek week, I will be announcing a game changing new tech we have for SV. Bitcoin as it was originally intended And, only SV”.

This resulted in an upliftment of investor sentiment, leading to a bull run for the token. Wright had earlier stated that his vision was to make BSV the distinguished version of Bitcoin. Wright also predicted that in two to three years, the capacity of the cryptocurrency will increase exponentially, to 2 to 4 billion transactions a block, facilitating 6.5 million transactions a second.

However, the exponential increase in BSV’s ranking in the market has led to many cryptocurrency enthusiasts speculating the other reasons behind the sudden growth.

A Twitter user, EricVailNaylor2, suggested that Wright sold off his Bitcoins to buy BSV to pump it. 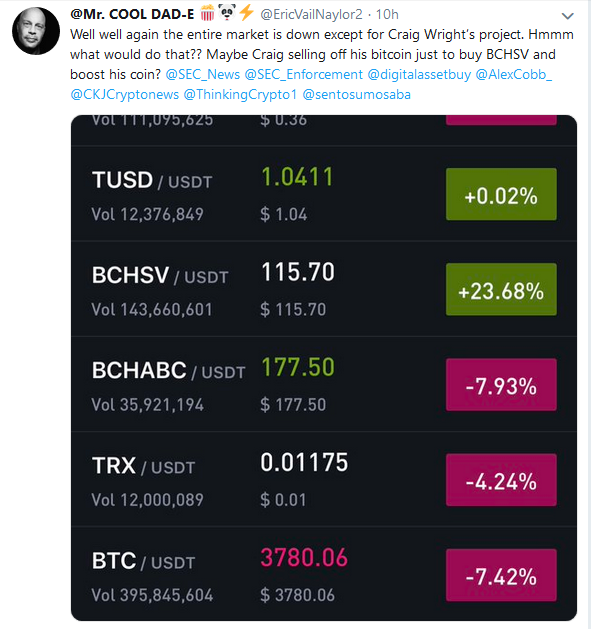 Meanwhile, BSV’s competition, Bitcoin Cash ABC, now termed BCH, was priced at $186 with a market cap of $3 billion dollars on Tuesday. At the time of writing, BSV was priced at $114 and saw an 18% growth in the last 24 hours, with the trading volume at $602 million. The difference between the two tokens is very less, and BSV might have a chance here to catch up.

However, the global market cap is on a new low at $122 billion for the first time since August 2017, reported bfocus. Many major coins are seeing a new low and danger is sparkling in red, though the pastures look green for BSV for now.