The 1st week of November continues to be a bliss for all the Bitcoin Cash [BCH] hodlers and proponents. The cryptocurrency market is depicting a bleak performance over the past week with all the major coins staying under the bear’s claws. Bitcoin [BTC], Ethereum [ETH], XRP, and EOS are experiencing a slight bearish touch in the past 24-hours.

However, BCH is showing a relentless performance in the past week with a 22.42% hike. At the time of writing, BCH is trading at $530.43 with a market capitalization of $9.25 billion. The cryptocurrency closed at a price of $477.99 yesterday and has shown a massive surge of approximately 15% in the past 24 hours to reach the current price. The highest trading volume of BCH is occurring on the exchange platform, OKEx, which is about 10.3%. The coin is also being traded on Binance, Bitfinex, Huobi, and Upbit with a good amount of trading volume. 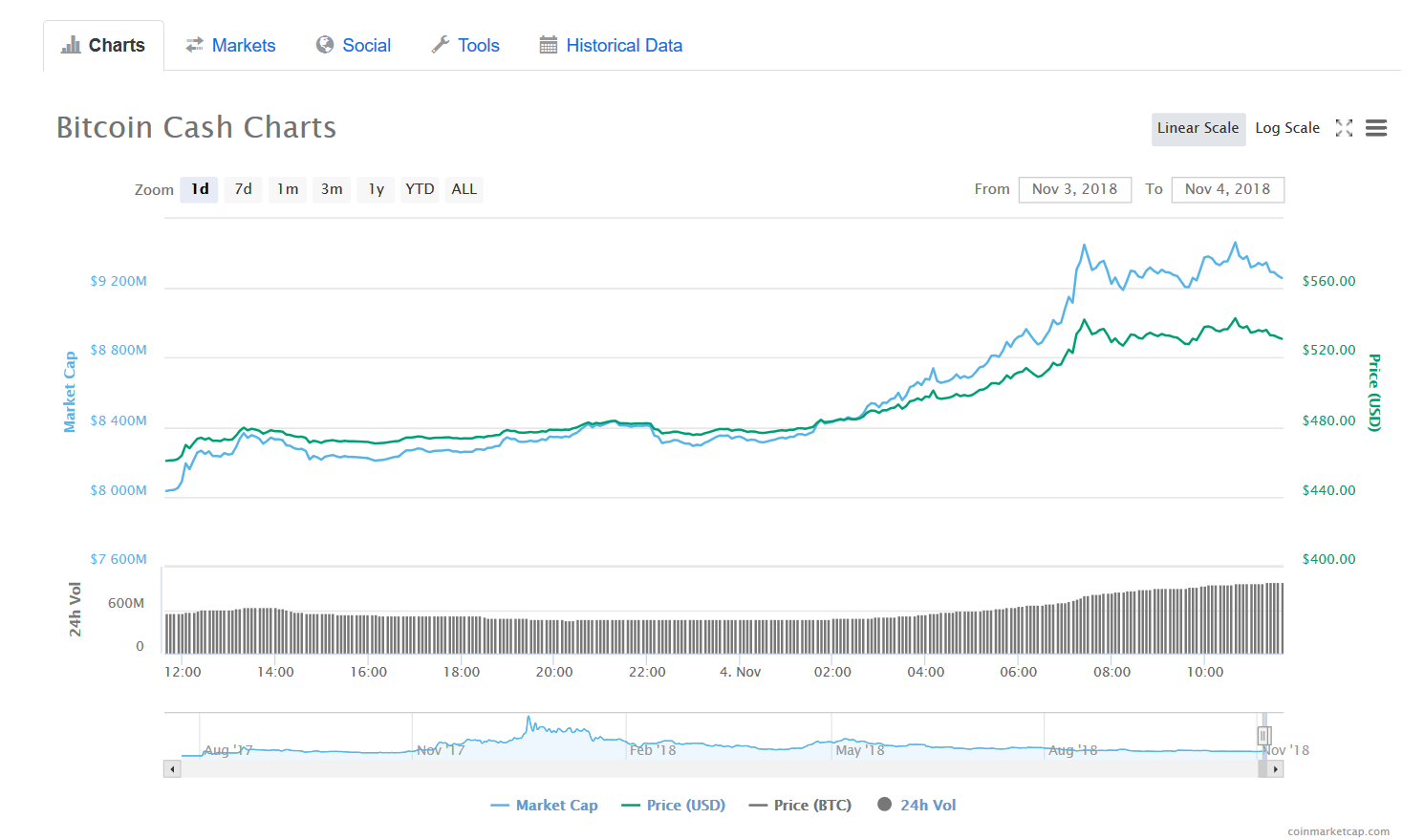 The upcoming Bitcoin Cash hardfork is said to be the major reason behind the massive surge in price. The conflicting consensus change between the community members led to this hardfork, which is scheduled on 15th of November around 4:40 PM GMT. The blockchain will be split into Craig Wright’s nChain implementation and Bitmain’s Wormhole. One of these chains will be expected to be the dominant chain in the coming days.

Notably, the hardfork has received support from major exchanges such as Binance and Coinbase. In a recent announcement by Coinbase, they mentioned that they will be supervising the hard fork stipulated to take place on November 15 with the main intention of minimizing transaction disruption for users.

The cryptocurrency community has been showing their reviews on various social media platforms regarding the price surge.

“Someone figured this really is the bottom and decided to get a jump on buying, perhaps. There’s a big spike in the volume that coincides with the spike in price (obviously…) and then there seems to be a red volume spike forming from people selling. Market manipulation? Someone accumulating in a hurry? Pump and dump? Who knows.”

Some of the blockchain proponents speculate that the rise in price is due to Bitmain releasing their financials ahead of their planned IPO.

“The narrative by the anti-BCH crowd was that Bitmain could be insolvent or that they may delay their IPO because they invested too much into BCH. But now with their official filing, their financials are public for all to see. They are extremely healthy financially.”

“Btc folks were claiming that bitmain was going running out of money when come to find out they are a major cash cow. Blows nivida out of the water by a mile. Investors will be salivating over this IPO. I’ve studied their new financials, super impressive.”

There is also a good portion of the community which believes that the price action is just a pump and dump, which is very common in the cryptosphere.