The cryptocurrency market has been blessed by the bull with several coins seeing a marked price hike. Cryptocurrencies like Ethereum [ETH], XRP and Bitcoin Cash [BCH] all saw remarkable highs which have contributed to the market momentum increasing.

At the time of writing, Bitcoin Cash [BCH] was rising by 5.84% with a total market cap of $10.384 billion. The cryptocurrency was trading for $600.97 with a 24-hour market volume of $844.747 million. The majority of the cryptocurrency trade volume was held by OKEx which had a grasp on $99.320 million. OKEx was closely followed by BitForex which encompassed $83.556 million of the entire BCH trade. 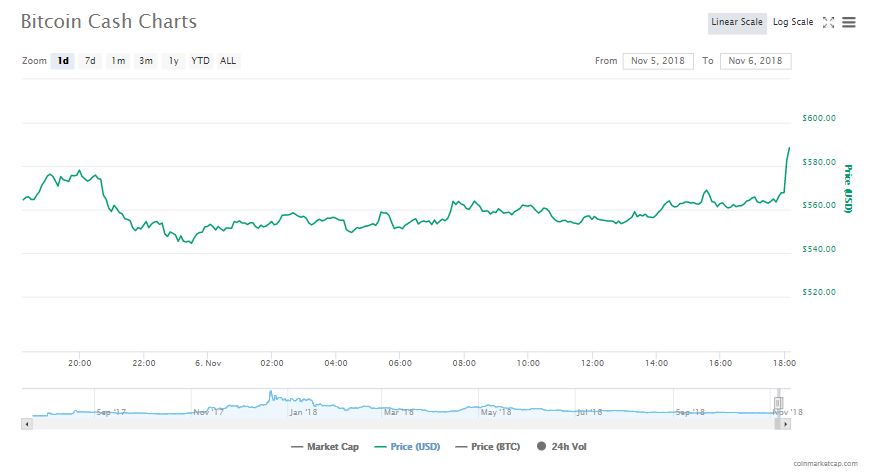 This is not the first time that BCH has risen so dramatically with the cryptocurrency going up by 22% just two days back. November looks to be a crucial month for Bitcoin Cash with the upcoming hard fork playing a crucial role in controlling the prices. The hard fork, which is slated to take place on November 15 aims to increase the ease of transaction for users and decrease transaction disruption.

“Someone figured this really is the bottom and decided to get a jump on buying, perhaps. There’s a big spike in the volume that coincides with the spike in price (obviously…) and then there seems to be a red volume spike forming from people selling. Market manipulation? Someone accumulating in a hurry? Pump and dump? Who knows.”

Bitcoin Cash was also given a boost recently when Kathryn Haun, the former Federal Prosecutor praised Bitcoin Cash over Bitcoin. She said that despite Bitcoin being in the market for a decade, the use cases have not reflected its dominance. Haun further made BCH’s case by linking it to Satoshi Nakamoto’s vision by saying:

“[…] it’s main use is certainly not that. However, Bitcoin Cash is trying to do that. The reason Bitcoin is been held back aside from volatility is the scaling. And right now, you have things like the Lightning Network, which are being built and Lighting Network is aiming to increase the ability to use Bitcoin for payments”