On November 8, two proponents of the Bitcoin Cash [BCH] community were found having a serious battle when one of them, Roger Ver, revealed an email that he received from Craig Wright this week. The message was apparently of an unprofessional nature wherein Wright aka Faketoshi displayed much hostility and outrightly bad-mouthed Ver. Some of the content from the email read:

“Bitcoin will die before ABC shits on it. I will see BCH trade at 0 for a few hours. Will you? Side with ABC, you hate Bitcoin, you are my enemy. You have fucking no idea what that means.” 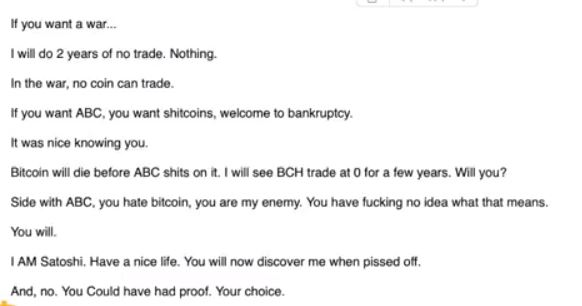 Next, Ver mentioned an email he received from Calvin Ayre, where he described the message as mature and civil. Ayre sent Veran an email at the onset of the November BCH hard fork and asked the Bitoin.com CEO to “rejoin the camp that supports economic freedom”. To this, Ver stated:

“Maybe Calvin and I have a little bit of a difference of agreement as to what the best tools are to achieve more freedom for the world but that’s fine you know different people can have different opinions.”

Roger Ver also spoke about the dilemma of splitting the coins. He cited the case of Ethereum and Ethereum Classic and mentioned that not splitting the coins became a problem during the hard fork as the customers of ETH were depositing ETH and receiving mixed coins from the exchanges. He added:

“They say you can’t split the coins at all because people are going to lose coins, but I think they have it backwards and we have the empirical evidence from the last time when Ethereum split into ETH and ETC, a number of exchanges did not implement replay protection and as a result tons and tons of customer money was lost on these exchanges”

Earlier this week, another Bitcoin Cash proponent and CEO of Money Button, Ryan Charles, had opined that the hard fork of the coin does not necessarily need replay protection. A replay attack is is an attack where valid data transmission is repeated or delayed.