At the time of writing, Bitcoin Cash [BCH] was growing by 4.93% and was trading for $540.02. The total market cap of the cryptocurrency was $9.418 billion, with a 24-hour market volume of $1.374 billion. A majority of the cryptocurrency’s trade volume was held by OKEx, with a hold on $168.498 million worth of BCH. OKEx was closely followed by DigiFinex, covering $134.561 million of all the Bitcoin Cash trade. 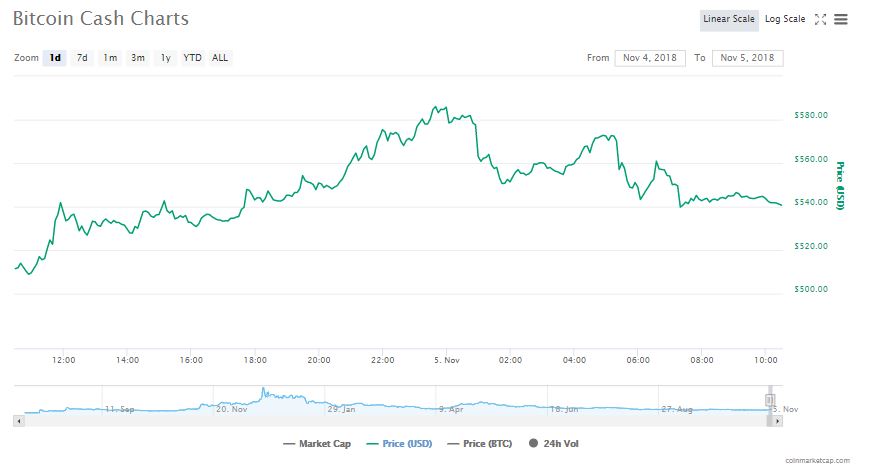 Bitcoin Cash had risen to its resistance point of $586.05 on November 4, driving a lot of users and investors to jump on the Bitcoin Cash bandwagon. The cryptocurrency was given a boost recently when Coinbase and Binance, both popular cryptocurrency exchanges, had announced their support for the upcoming Bitcoin Cash hard fork. The Brian Armstrong-led company had said:

“We will pause sends and receives on the BCH wallets at Coinbase.com, in our iOS and Android apps, and at Coinbase Pro and Prime beginning at 8:00AM PST on 11/15/2018 (approximately 1 hour before the fork). Please be sure all BCH sends and receives are completed prior to that time. During the pause, your BCH will remain safely at Coinbase.”

Binance, the world’s largest cryptocurrency exchange in terms of volume, had said that the company will be making an announcement after the Bitcoin Cash hard fork to notify users about the details of the transaction on the platform. Binance had stated: