Bitcoin Cash [BCH] has suffered mutilation at the hands of Jihan Wu and Craig Wright due to the recent hard fork that took place on November 15. The hard fork resulted in two entities [Bitcoin Cash ABC and Bitcoin Cash SV] that were fighting to win the original Bitcoin Cash ticker.

The price of Bitcoin Cash ABC, which is currently being considered as Bitcoin Cash, was trading at $246.67 and had a market cap of $4.25 billion at the time of writing. According to CoinMarketCap, Bitcoin Cash was up by 14.88% in the past 24 hours. 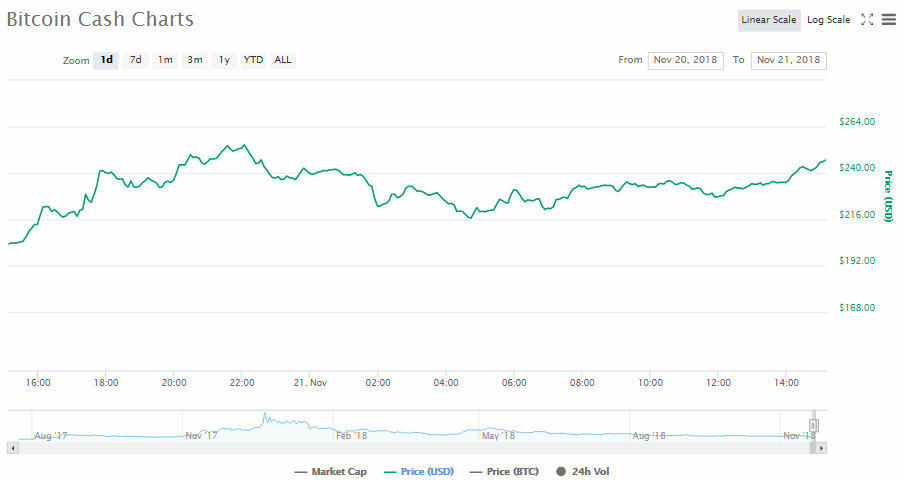 Bitcoin Cash has finally climbed back up from the bear’s pit after suffering a massive decline of 15% over the past few days. However, the seven-day time interval shows a severe decline of 51.43%.

The 24-hour trading volume for Bitcoin Cash is $136.11 million, which is being provided by Binance in trading pairs BCH/USDT and BCH/BTC. Binance contributes a total of 31.56% of the total trading volume that adds up to $46.83 million.

Binance is followed by a Korean exchange Upbit, which contributes to the trading volume through pairs BCH/KRW. The total contribution by Upbit is 19.14%, i.e., $28.40 million.

Coinbase, in an announcement, supported Bitcoin Cash ABC and provided it the original BCH ticker and substantiated their decision by saying that it has the longest proof-of-work chain as compared to Bitcoin Cash SV.

The post Bitcoin Cash [BCH] climbs out of bear’s pit; soars by 14% appeared first on AMBCrypto.