Opinion: Craig Wright’s associated mining pools, namely Coingeek, SVPool, and BMGPool [nChain], have collectively taken over control of over 70% of the Bitcoin Cash [BCH] network. This presents an interesting, yet risky setup in the general hashrate distribution of the BCH blockchain, and gives Faketoshi, who has been called out as being a fraud and even crazy on many instances, complete control of the BCH blockchain until the chain split.

However, this comes along with news of Bitmain reportedly deploying more than 90,000 new miners to the Xinjiang region of China, which is set to increase their miner count from an existing 120,000 to almost 200,000. This would effectively stop the competition in their tracks, thus creating a situation that has recently been branded a “hash war”. 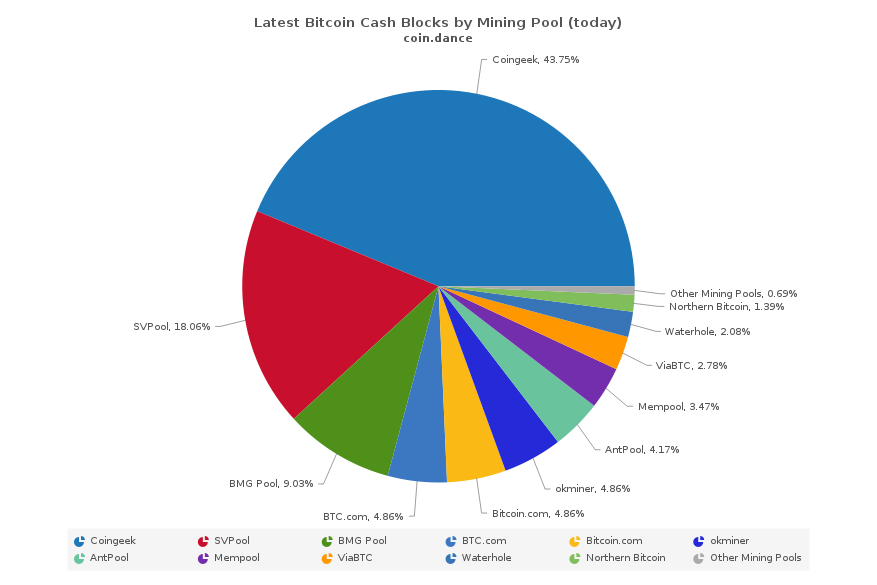 However, in this new age “war”, it is Bitmain that makes the weapons required to fight the war itself. Even as the company is struggling with a lot of BCH as an asset which cannot be liquidated without a loss to the entire market, it has managed to rustle up more hashpower and effectively take control of the BCH chain.

Currently, Coingeek has found over 43.75% during the last day, SVPool has over 18%, with nChain’s BMG Pool at 9.03%. This has led many to believe that the entire hashrate of the BSV side has been deployed, with the battle to be decided by third-party mining pools. This is where the situation develops further.

Jiang Zhuoer, the founder of BTC.TOP, a mining pool which accounts for about 10% of Bitcoin’s hashrate, stated:

Similarly, the founder of ViaBTC, Haipo Yang has also previously declared support for Bitmain and Bitcoin ABC. The ABC chain has a lot of support financially as it is said to be the implementation that many of the exchange platforms have decided to support, owing to the fact that many platforms already do support the implementation.

Even after accumulating so much hashpower, it might prove difficult for the Bitcoin SV chain to 51% attack the ABC implementation and claim the BCH ticker symbol for themselves. However, with the threat of Bitmain’s equipment hanging over their heads, it seems difficult to believe that they will be able to hold onto their dominance. A source familiar with the matter in China stated:

“Half of its marketing staff have gone to Xinjiang to talk with local mining operators about deploying equipment. A single [AntPool] mining farm should host over 5,000 machines,”

The Bitcoin ABC implementation has gained support in implementation by Binance, Coinbase, and OKEx, while others such as Poloniex, HitBTC and BitFinex vowing to support both the coins.

The ABC side of the BCH camp is set on not changing the basic structure of the BCH protocol, referring to it as “sound”. However, they are focused on improving 0-confirmation transactions to make the coin usable as money, improving fungibility and enabling scaling through the removal of mempool admittance code.

“Because miners should drive the roadmap in the Bitcoin space, CoinGeek and other miners asked nChain to create a professionally-driven implementation of the Bitcoin full node software (for use on BCH) that restores the original Bitcoin protocol.”

Wright has been vocal against his opposition, stating that Bitmain, ABC and Roger Ver will utilize the BCH chain for criminal purposes and child pornography. Jihan Wu has also not held back, calling CSW a Blockstream spy and a fraud.

“And, no you ABSOLUTE cuck. Bitcoin IS not even close to a soy boy commitee. It is all use hard assed buggers bending you over to show you the light.  It is capitalism. Enjoy”

However, at this point, utilizing the BCH blockchain will put the power in the hands of Calvin Ayre and Faketoshi Wright, as they easily control over 50% of the chain. An interesting issue seems to be brewing.