In his recent fiasco, Nouriel Roubini aka Dr. Doom, took to Twitter on November 20, to state that kingpin cryptocurrency, Bitcoin [BTC], is a bubble, and has gone bust as the token plunged 80%. He further added that almost all altcoins followed the trend by falling prey to the bear, with their prices dropping 80% to 99%. To make matters worse, he even called the Twitter community “toxic”. 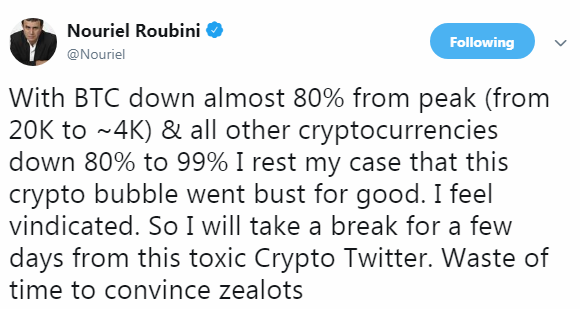 The last few weeks have been a traumatic experience for anyone holding Bitcoin [BTC] or any other altcoins, including Ethereum [ETH], XRP or Stellar Lumens [XLM], as the markets have crumbled under the bear’s pressure. The crypto-markets have been drained of the blood as cryptocurrency fell down by double digits.

Nouriel Roubini aka Dr. Doom has always been against the crypto-revolution and has criticized the cryptocurrency revolution as a myth. He had earlier compared blockchain to a ‘glorified excel sheet’.

The Bitcoin community and the cryptocurrency community is divided into individuals who are long on Bitcoin and others who have already sold their holdings due to FUD and panic as Bitcoin hit its an all-time low of $4,100 for the year 2018.

The market cap of Bitcoin has fallen by a whopping $33 billion whereas the total market cap of the entire cryptocurrency market has collapsed by $120 billion.

The community speculates that the drop in Bitcoin’s prices was due to the “hash wars” that caused the fork of Bitcoin Cash into Bitcoin Cash ABC and Bitcoin Cash SV.

Nouriel Roubini, is a New York University professor who is known for his apparent prediction of 2008 financial crisis. He has criticized cryptocurrencies on multiple occasions, calling it a bubble that could burst soon and sabotage the economic environment.