The cryptocurrency market’s bearish behavior seems to have changed, with most of the altcoins seeing green over the past couple of days. The bullish surge of the market has come even though the price of Bitcoin [BTC], the cryptocurrency with the largest market cap, has remained relatively unchanged.

At the time of writing, Basic Attention Token [BAT] was seeing a massive surge of 8.36% and was trading for $0.313. The cryptocurrency held a market cap of $313.231 million, with a 24-hour market volume of $17.178 million. The majority of BAT’s volume was held by Binance, which had a grasp on $8.998 million of the total Basic Attention Token trade. Binance was closely followed by Upbit, which saw $1.865 million worth of BAT being traded on the platform. 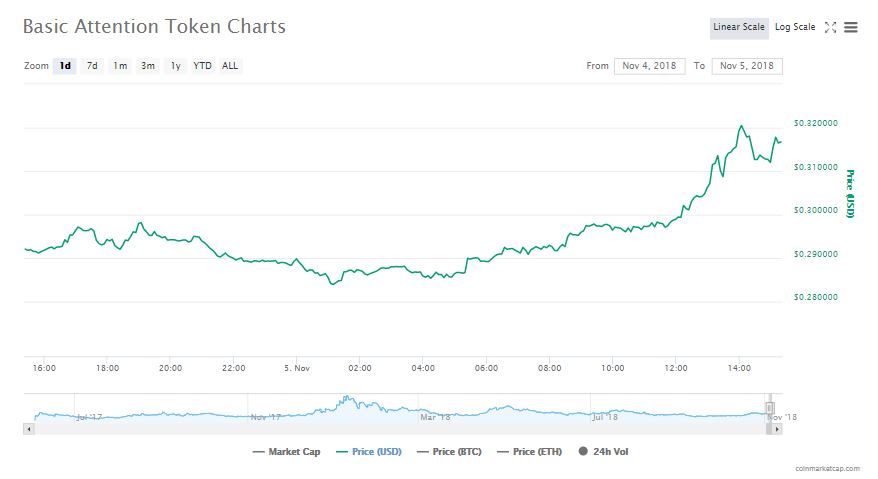 “BAT is launching on Coinbase Pro! Starting at 1pm PT today, customers can transfer BAT into their Coinbase Pro account. Traders can deposit BAT, but cannot place or fill orders. Order books will remain in transfer-only mode for at least 12 hours.”

The current price hike is not the first time that the cryptocurrency has undergone a shoot up, as the coin saw a 57.5% hike just a few weeks back. BAT had also made news when the company launched its very own native web browser, the Brave browser. The organization has also stated that the browser will be compatible with all Chrome extensions. BAT had also tweeted:

“Our new desktop browser has a 22% faster load time on average than our exiting Brave Muon version. That’s as much as 8-second faster page loads on certain sites.”