What does retirement look like to you?  Have you ever thought about how you want to spend your days after you stop working for good? 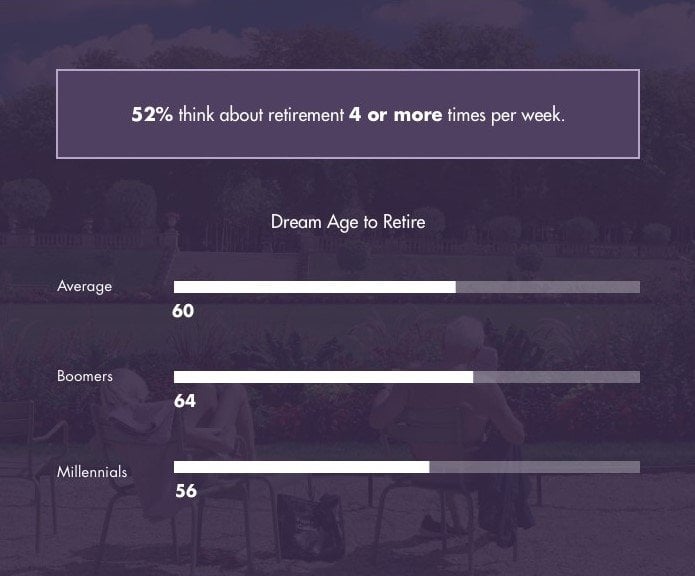 In October of 2018, Provision Living surveyed 2,000 Americans and asked them to envision their ideal retirement lifestyle. Surveyed respondents were surveyed on everything from ideal retirement age, to retirement savings, to where they pictured themselves living when they’ve retired.

Let’s take a deeper look at what they found to see how Americans envision spending their golden years in retirement.

The survey found that 52% of Americans think about retirement 4 or more times per week. The dream age for retirement varied between the different generations that were surveyed although the average dream age to retire was 60 years old. Boomers said 64 years where Millennials were more optimistic saying they hoped to retire by age 56.

Listed below are the top American cities that people want to live in when they retire:

The survey also took a deep dive into finances to see just how much money Americans had saved for retirement.  As you can imagine the outlook was not good.  43% of millennials currently have less than $5,000 saved for retirement. 37% of millennials think they won’t need social security when they retire and 39% of people believe they won’t be financially security enough to live without social security. They survey also showed that Americans believe they will need at least $610,000 to retire, however most expect to only have $276,000 saved by the time they retire.

The full breakdown of the American dream retirement from Provision Living can be seen in the graphic below.

The post 37% Of Millennials Say They Won’t NEED Social Security When They Retire, But 43% Have Less Than $5K Saved appeared first on ValueWalk.