The cryptocurrency market’s bearish run seems to have turned with latest numbers showing that a majority of the coins have started climbing on the bullish ladder. Popular cryptocurrencies like Bitcoin [BTC], Ethereum [ETH] and Tron [TRX] have all come out of their slump and made investors happy with their individual spikes. 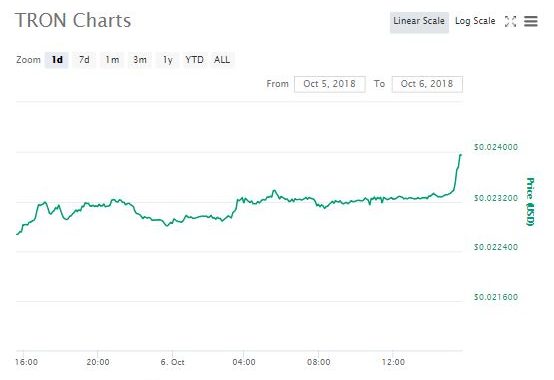 During press time, Tron’s market cap was just $10 million more than that of the 13th placed Dash. Tron was also in the news recently when Justin Sun, the Founder of Tron announced that uTorrent Web has broken the record of 1 million daily active users. In the official tweet, he wrote:

Tron’s march towards mainstream adoption got another boost when Exodus and the Foundation announced that Exodus was extending support to the native TRX token.

“Exodus now supports Tron $TRX mainnet. TRX is exchangeable with nearly 50 assets. You can swap BTC, ETH, XRP, XLM, OMG, DGB and many other coins directly for TRX within the comfort and security of your own wallet. “