The recent bullish spike that saw a lot of cryptocurrencies shoot up in value may have calmed down but October 16th saw a marked spike in the price of Tezos [XTZ]. This comes in the wake of popular cryptocurrencies like Bitcoin [BTC], Ethereum [ETH] and XRP slowly falling back into the clutches of the bear.

A majority of the Tezos’ market volume was held by Gate.io with a total grasp of $1.478 million of the total trade. Gate.io was followed by Bitfinex with a hold on $423,157 of the entire XTZ trade. 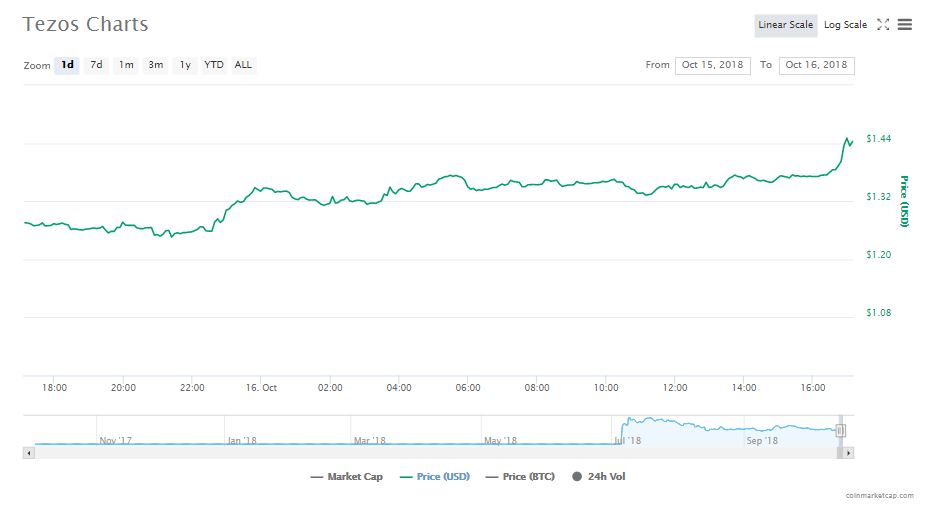 The sudden increase in the price of Tezos is speculated to be because of its listing on Kraken. Ever since the Tezos main net was launched a few weeks ago, things have shifted into a higher gear for XTZ. A growing list of exchanges support this token at this time, and it appears that list will continue to grow for quite some time to come.

It has been an impressive run for Tezos so far, although it remains to be seen if this can have a lasting effect on the value over time.

Twenty seventeen saw a wave of panic spread among Tezos users as they had not heard of any developments from any Tezos team. The recent developments seem to have made holders happy with Trendycrypto, a Twitter user commenting:

The post Tezos [XTZ] shoots up by a massive 12% post the Kraken listing appeared first on AMBCrypto.