Money spent on lottery tickets would grow quickly if invested instead, study finds

Many people know the odds of scoring the Mega Millions jackpot are 1 in 302 million — so it’s astoundingly difficult to win. But what they don’t know is that by just investing that money wisely they could still win big!

Americans spend close to $73 billion on lottery tickets during a typical year, based on U.S. Census data. A study by MoneyWise.com shows that if that money was invested in stocks instead, it has the potential to grow quickly and impressively — by $26 billion within two years. For example, if Kentuckians had invested the $921 million they shelled out for lottery tickets in 2016, that pool of money would have grown to $1.3 billion by the end of 2017!

Even though it may feel like just a few dollars at a time, over time lottery spending really adds up. In fact, in Massachusetts, West Virginia and Rhode Island the average per-person lotto spend is over $500 a year! You can check out the average lotto spend numbers per state in this Moneywise.com article.

JUPITER, Florida — Oct. 22, 2018 — Americans spend close to $73 billion on Mega Millions and other lottery tickets during a typical year, according to U.S. Census data, yet the odds of winning a big jackpot are overwhelmingly poor. But if that money were invested in stocks instead, it would grow quickly and impressively — by more than $26 billion within two years, a MoneyWise.com study finds. 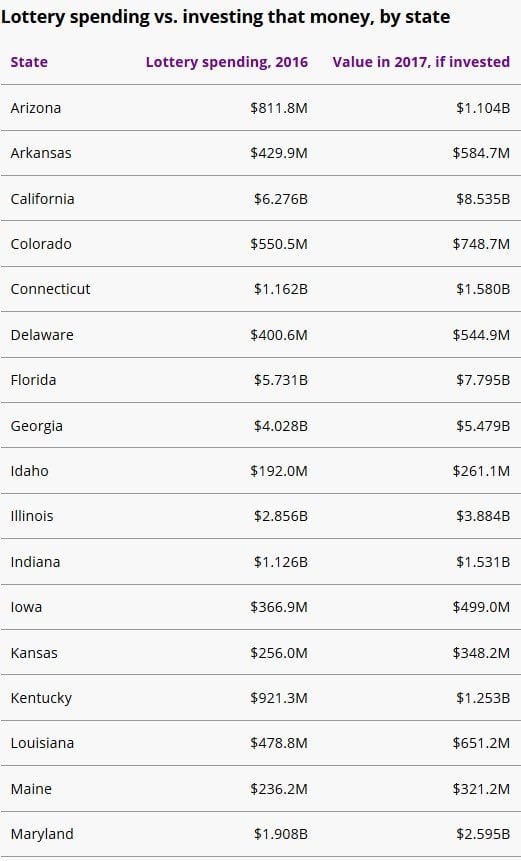 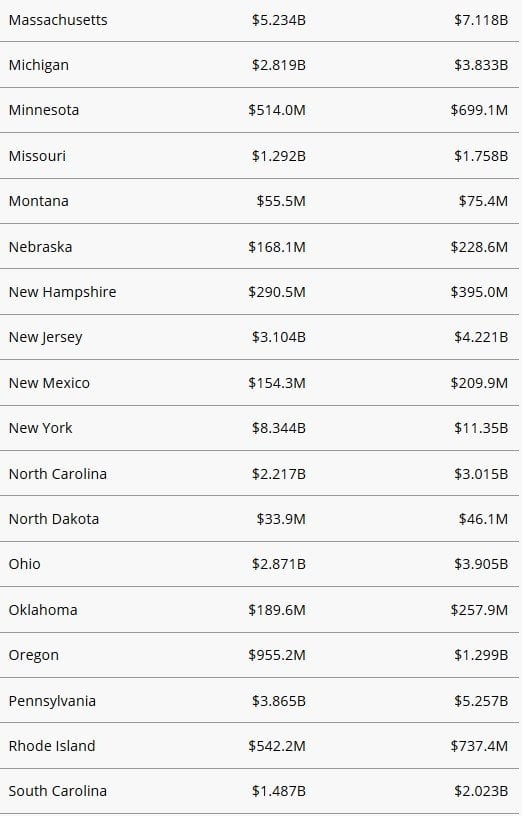 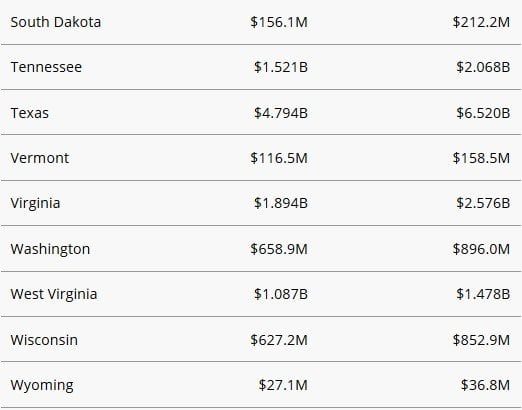 The full story can be found here: https://moneywise.com/a/stop-buying-lottery-tickets

The average American who spent about $313 playing lotteries in 2016 would have had $425 by the end of 2017 if the money had been placed instead into an S&P 500 index fund, a fairly simple investment that seeks to mimic the benchmark S&P 500 stock index. The $72.7 billion that U.S. adults spent collectively on lotteries would have grown to $98.9 billion in index funds.

The MoneyWise.com report also looks at the lost investment gains from the annual lottery spending in each state.

For example, if Kentuckians had invested the $921 million they shelled out for lottery tickets in 2016, that pool of money would have plumped up to almost $1.3 billion by the end of 2017.

A companion article reveals the states where average, per-person spending on lottery tickets is highest — and how those amounts could have grown if invested: http://moneywise.com/a/states-spend-most-on-lottery-tickets

“It’s OK to spend a couple of dollars just for fun on those rare occasions when there’s a stratospheric lottery jackpot,” said Doug Whiteman, MoneyWise.com editor-in-chief and saving-money analyst. “But if you’re buying tickets on a regular basis, you could easily be spending hundreds a year. Very few people come out ahead. Why not invest that money and earn good returns?”

Standing in the lottery line at the supermarket might seem harmless and easy — but today’s apps and automated investments services make investing incredibly simple.

“And you won’t get that very familiar feeling that can comes over you when you leave a store with lottery tickets in your hand,” Whiteman said. “You know, that feeling that maybe you just threw your money away.”

METHODOLOGY: MoneyWise.com gathered U.S. Census data on 2016 lottery spending nationwide and in each state and determined the average annual spending per adult. Then, 2016 and 2017 S&P 500 returns (with dividends reinvested) were used to calculate how the amounts spent on lotteries might have grown by the end of 2017 if the money had been invested in S&P 500 index funds instead.

MoneyWise.com was founded in 2017 to provide personal finance information, news and tools in a way that is clear, trustworthy, valuable and cool. With editorial offices in South Florida and administrative offices in Toronto, we give tips on how to save money, how to find the best bank accounts, how to choose a credit card, how to get the best mortgage rates and how to navigate many other money matters. We like to make the topics fun, but we’re serious about our mission: to help consumers make smart financial decisions and get ahead.

The post Lottery Players Lose Out On Billions In Investing Returns appeared first on ValueWalk.