The cryptocurrency market was seeing a marked bearish run with most of the coins seeing red across the spectrum. Major cryptocurrencies like Bitcoin [BTC], Ethereum [ETH] and Litecoin [LTC] were under the shadow of the bear which was made evident with the visible slide in the price.

At the time of writing, Litecoin [LTC] was going down at the rate of 3.83% with a total market cap of $3.400 billion. The cryptocurrency was trading at $58.06 with a 24-hour market volume of $468.163 million. Litecoin was holding a strong 7th position on the cryptocurrency charts, according to CoinMarketCap, with a market cap difference of $1.161 billion with the coin just above it, Stellar Lumens [XLM]. 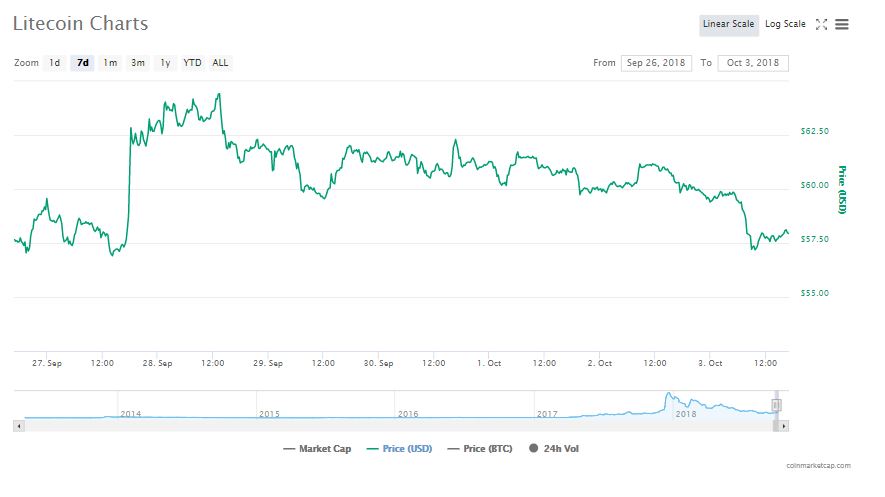 Most of the Litecoin trade was held by Bibox, with a majority of 16.29%. The total trade volume on the exchange was $94.192 million which was closely followed by ZB.COM’s $93.056 million.

Litecoin’s fall has been in sharp contrast to the occurings of last week when the cryptocurrency shot up by 8% in a span of just 24 hours to the delight of investors and fans alike.

“While the price has been seeing extremely volatile movement, it seems to be decoupling it’s growth from Bitcoin. This is an interesting phenomenon, and might be indicative of a future split between the usecases of Bitcoin and Litecoin.”

“This partnership provides increased liquidity and institutional exposure for Litecoin. SFOX is backed by several well-known investors, which speaks to the company’s business model and team.”

The post Litecoin [LTC] joins Ethereum [ETH] and XRP on the bearish slide; falls by 4% appeared first on AMBCrypto.