Last week the Intergovernmental Panel on Climate Change (IPCC) released its ‘Special Report on Global Warming of 1.5 °C’. The long-awaited, highly anticipated report from the UN climate science body, is one of the most comprehensive studies on climate change. The report considers the actions required by the global community to limit global warming to 1.5°C, the lower target of the Paris Agreement.

The 1.5°C target is at the lower end of the Paris Climate Agreement target range. Limiting warming to this level will bring significant benefits to the world, avoiding the physical impact of the higher (but still acceptable) 2°C target.

Get Our Icahn eBook!

Get our entire 10-part series on Carl Icahn and other famous investors in PDF for free! Save it to your desktop, read it on your tablet or print it! Sign up below. NO SPAM EVER

At the current rate, the 1.5°C threshold will be reached by 2040 according to the report, unless carbon dioxide emissions to climb by 45% by 2030 and reach net zero by 2050. Such a dramatic reduction in carbon dioxide emissions in such a short period will require “rapid, far-reaching and unprecedented changes in all aspects of society,” and more importantly, meeting this target will also need some removal of CO2 from the atmosphere.

While technically possible, removing CO2 from the atmosphere is still a relatively untested and expensive process. 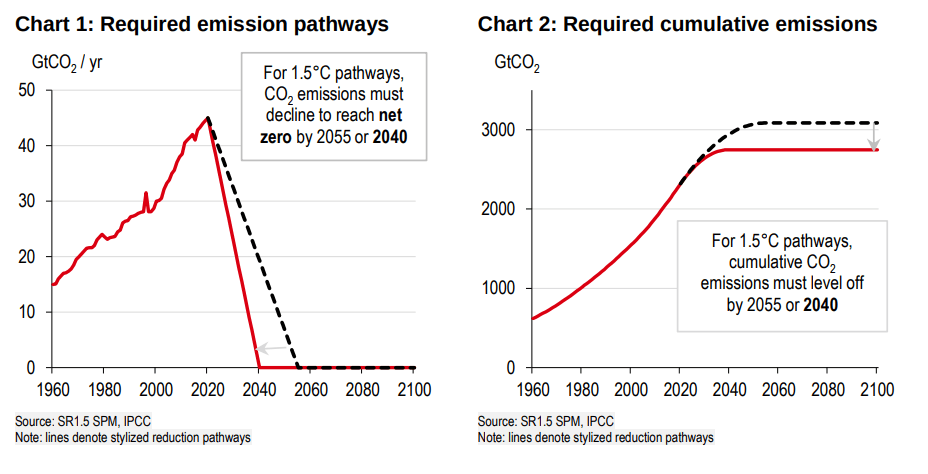 Earlier this year, a Canadian company backed by Bill Gates called Carbon Engineering published a study claiming that it can extract carbon from the atmosphere for less than $100 a tonne, a significant reduction on the current price of around $600 per tonne. However, even this price is not low enough to make extracting large amounts of CO2 from the atmosphere economically viable.

Around 10 billion tons of carbon dioxide is emitted by human activity annually. Even Bill Gates does not have enough money to make a dent in this total at the current per-tonne cost of extraction. HSBC’s report on IPCC release estimates that roughly 100–1000Gt of CO2 will need to be removed from the atmosphere by the end of the century.

Extracting carbon dioxide from the atmosphere is just one of the challenges humanity will have to overcome to limit global warming to just 1.5°C according to the report. It estimates that the marginal abatement costs to humanity are three to four times higher at the 1.5°C target compared to 2°C. In other words, the global population is going to have to make some tough choices if it wants to successfully meet the target at the lower end of the Paris agreement range.

The sheer cost of trying to meet the proposed 1.5°C goal is tremendous. The IPCC report contains cost estimates for various industries based on current levels of technology. As HSBC’s report explains:

“The report only gives dollar estimates for specific sectors in specific situations – but these have a very wide range and come with modest confidence levels based on the limited number of models which generate them. For example, for the energy sector, roughly $900 billion (with a range of $180-1800 billion) is required in energy-related mitigation investment from 2015-2050 for a 1.5°C pathway, however, this estimate was only generated from six models.”

And it is not just all companies that are expected to take a hit by restructuring operations to cope with the new, low carbon world.

The IPCC report also recognizes that there could be a significant human impact as a result of the adaptation process. Some of the potential negative impacts given as a result of efforts to reduce carbon dioxide emissions around the world include an “increase [in] water use, gender and social inequality” and the possibility of undermining “food security, livelihoods, ecosystem functions, and services and other aspects of sustainable development.”

On the other hand, there will be numerous benefits to limiting warming to just 1.5°C. The report demonstrates the overwhelming (overall) synergies of mitigation action.

However, it is clear from the findings that policymakers around the world will be forced to make hard choices in the next few decades as they try and steer the world away from its polluting past towards a greener future.

This article first appeared on ValueWalkPremium

The post Here’s What Humanity Will Have To Pay To Limit Global Warming Per HSBC appeared first on ValueWalk.